I just finishing reading an article of the Top ten worst unhealthiest food of 2009 and to NO surprise Cheesecake Factory's: Chris’ Outrageous Chocolate Cake is on the list. 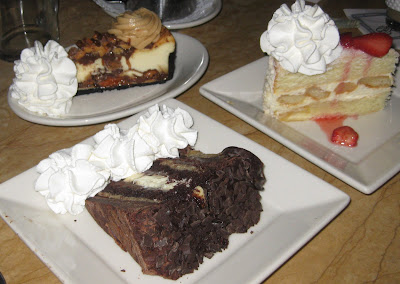 I've had this cake many times at Cheesecake but of course it's shared by the entire table of at least 4 people.

NOW I'm armed with this information of the top ten worst food and last night when I was at Cheesecake Factory for dessert I go and order Chris' cake! I don't know what the hell is wrong with me but it was mighty tasty as usual. I had about 1/4 of the serving, skipping the whipped cream! (I know, I'm soooo savvy smart) After the math: looks like I downed 345 calories 8 teaspoons of sugar, 8.25 grams of saturated fat and 1.25 grams of trans fat.

* I hope Cheesecake Factories in CA and NY is trans fat free since it's against the law.
** The peanut butter cheesecake is another sinner made with butterfinger and reese's pieces but it was damn delicious.