It is a little uncharacteristic of Monte Carlo Casino in Las Vegas to have a restaurant like Brand. The restaurant is owned by The Lighthouse group which includes FIX in Bellagio. Brand's decor and style is similar to FIX. The restaurant is open and situated in front of the game tables. They are offering a prix-fixe special like so many other restaurant because of the recession. The "Dinner for two" menu is $69.99 with a choice of salad, a strip steak, two side dishes and one dessert to share.

The hot freshly baked bread is served in a cask iron pan and since I love attention to detail Brand already garnered an extra star in my eyes. The menu is reasonable priced with appetizer under $20 (with expensive ingredients such as lobster and kobe beef.) A challenge is offered at Brand: If one person can finish the steak meant for 6 people, the steak is free. I wonder if anyone EVEN considered this challenge. 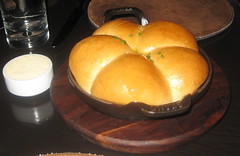 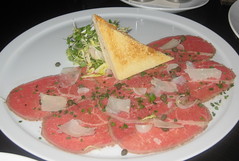 I'm a meat and potatoes gal even though I grew up in San Francisco where I should be adapting to some Raw Food diet or have a shrine tribute for Alice Water. I never pass up a chance to eat raw beef or a big hunk of beef. The Kobe Carpaccio is served with truffle butter toast and micro greens. The marbling on the beef wasn't as fatty as I've seen at other places but still very buttery and soft. 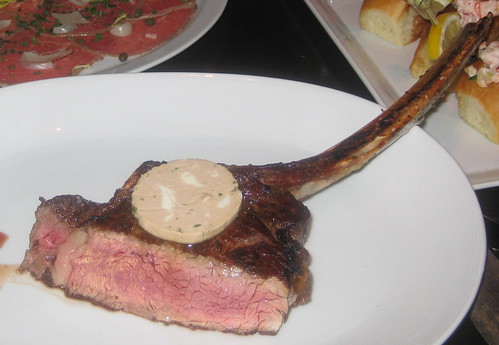 We also ordered "Anton's" (They named the dish after the CEO of Monte Carlo because he always orders this dish) bone-in 20oz ribeye for $38 and mini lobster rolls. The ribeye is accompanied with a peppercorn and worcheshire sauce and topped with truffle butter. For a steakhouse I was sorely disappointed, the steak was cooked to a medium rare but the meat was very chewy. I've had a much much much tender bone-in ribeye at Boa Steakhouse in the Ceasar's forum and elsewhere in San Francisco. The lobster was dressed with mayo, celery, carrots, and onions. The roll was richly butter with the skimpiest portion of lobster salad plopped on.

The total tab for 2 appetizers and one steak dish, no drinks with tax and tip came out to $96. The $40 hotel comp, in my mind justified the meal or I would rather go to SW Steakhouse or Craftsteak. The restaurant is stragetically located in front of the gaming tables where I proceeded to lose $65 at baccarat right after dinner.