A new gastropub in the downtown district of Redwood City. SO new they don't have their liquor license yet. I was told by my server this location use to be many different type of businesses, like a horse barn and oyster house. She said a lot of random junk were founded in the storage room. I like the exposed bricks and wooden beams in the middle of the room. The lighting was too dim and it was only lunch time.

We were the first customers and was seated in the middle of the dining room at a two top table. I asked for a bigger table which is no big deal but when 3-4 groups of 2 tops come in and the host didn't even tried to seat them at the same two top table infuriates me. 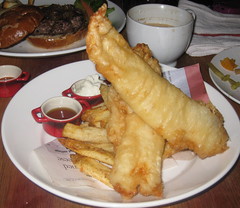 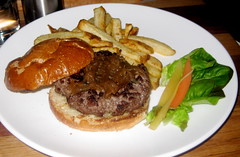 I like details and I was bothered with the fish and chip entree. The dish included 3 big pieces of fish but two of them were stuck together. If the dish was a bunch of tiny fried fish I wouldn't care but it was only 3 pieces. The cook should have noticed this when he was plating the dish so it sends a message that they don't care. The fish was also too oily (a little blotting would have helped) and the batter completely fell apart when I took a bite.

The kitchen did send out a complimentary dessert when I told then I didn't like the dish. I choose the sticky toffee pudding served with brown sugar ice cream. The pudding was dense and very sweet it could be shared with at least 4 people. 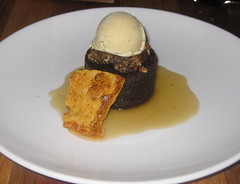 The standout and a dish I could eat over and over was the Scottish eggs. They are quail eggs encased with sausage and then flash fried to a golden crispy non-oily crust. The yolk was since oozing out with the sausage fully cooked. $6 for 3 pieces was pricey for Redwood city standards. Martin's West uses local and sustainable ingredients. They serve bluebottle coffee and creative mixed virgin drinks since the liquor license is still pending. 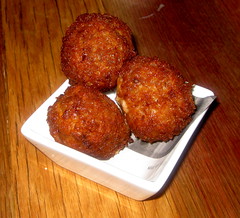 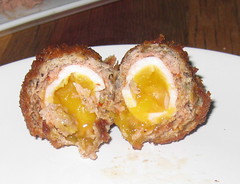 Notes: I noticed on other flickr accounts they offered soda bread with bacon bits and tabla (a sugar and milk candy) to go with coffee. I didn't get such offers.

iPhoto of the Moment