I began the warm breezy afternoon in the Mission. During the day, the Mission is a different scene, of course still filled with hipsters but no traffic, plenty of parking and all the restaurants are tame. Monk’s Kettle is no exception, come after 5 pm this tiny little restaurant/bar has a line out the door like they are giving away free beer.

Along one side of the restaurant is the kitchen and bar counter, the other side of the wall is equipped with half booths and large window bringing in natural light.

The #50 giant pretzel on 7x7 The Big Eats List is indeed GIANT, actually the size works well….for Big Foot. The pretzel was very hot, salted right and origami-ed with precision. The dish is served with stone ground mustard and homemade cheddar ale sauce. I was digging at the cheddar as it had a nice bitterness, I only wish I can cram the pretzel in my purse at the movie theatre. 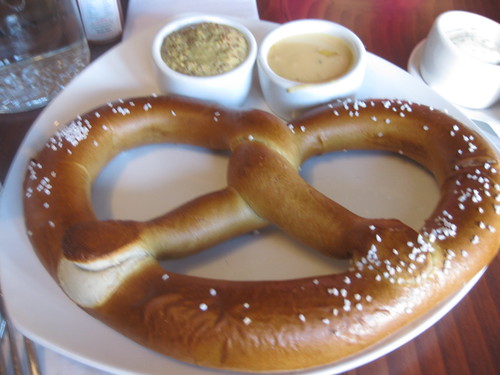 The basket of fries served with chipotle ketchup, herb and curry aioli turned my world upside down. The basket was piled high like a mountain and after 30 mins two people didn’t make a noticeable dent. The sauces! The sauces was flavorful, the curry aioli was my favorite I wanted to slab the sauce on rice, hot dogs, hamburgers, chips… 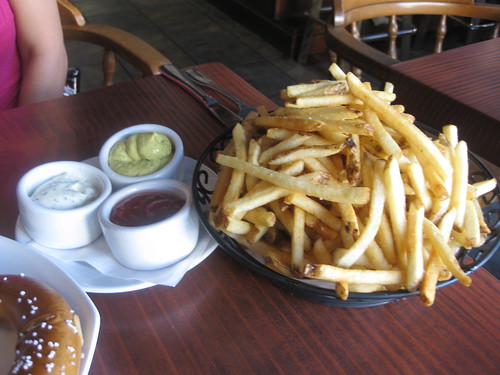 *I would like to preface the pictures at Slow Club are dark because the restaurant was very dark and I didn’t want to ruin the mood with my camera flashing off. 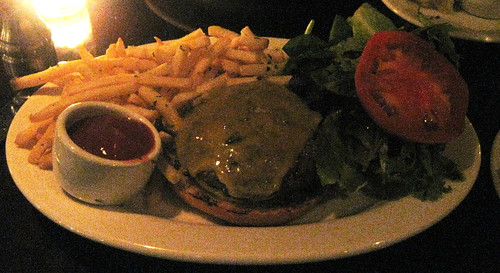 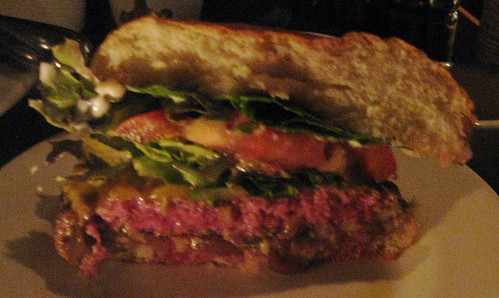 We started off with a potato and leek soup with shoestring potatoes, a nice thin creamy soup with the potato as the supporting actor. The Egg Fettucine with vegetable was sauteed in a nice lemon butter sauce mixed with artichoke hearts, zucchini, and tomatoes. The pasta dish had thin loose curly texture and nice roasted vegetable to contrast the light sauce but because the burger was so amazing it didn't get the attention it deserved. 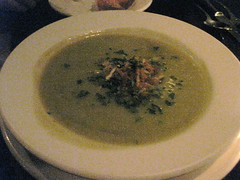 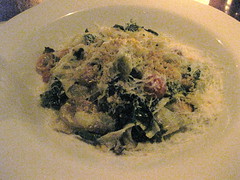 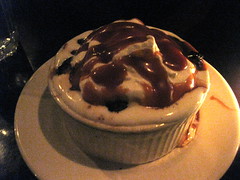 well, following along with you, now I have the pretzel/fries thing at monk's kettle and the burger at slo club on my ever growing long list of things to eat. I'm glad you are paving the way knocking the lame stuff off so I don't have to waste my time!