I shouldn't be eating as much encased meats as I do but I can't help myself. I annoy the Costco Aidells sausage sample table, asking to try every flavor, and exit the store with Costco's famous $1.50 hot dog combo. I sneak out at night to find a bacon hot dog cart to fulfill my craving. I go to Burger Bar in Las Vegas and order hot dog burger. I spend almost half a day in line at Hot Doug's and order three for myself. I don't want steak and eggs for breakfast I rather make a breakfast dog. I really shouldn't go on with my encased meat stories... 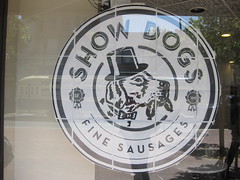 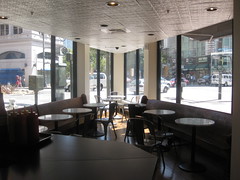 I aimlessly go into Tea Shops to find a genie so he can grant my wish of transplanting a Hot Doug's to San Francisco. Show Dog comes close, he's more like the 4.0 GPA sane cousin of Hot Doug's without the hilarious celebrity Pop star names or more adventurous toppings. 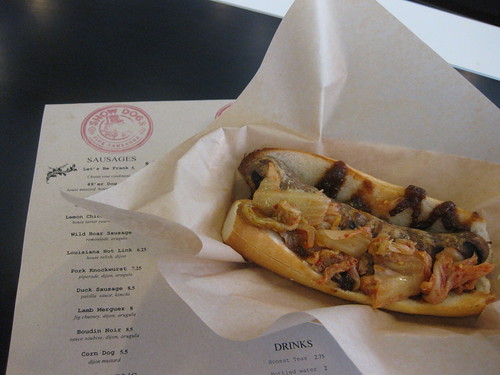 Show Dogs is located at the corner of Market where Taylor AND Golden Gate Ave meets. The neighborhood has its own colorful residents and loiters. Tu Lan is a hop and skip away, a popular hole-in-the-wall Vietnamese joint with positive buzz on the Internet. Show dogs offers a good selection of beers and a Showdog Sample (4 flavors) for $10. I wanted to try the buttermilk onion rings or kennebec fries, in my opinion the best potato for fries, but I was still full from breakfast. 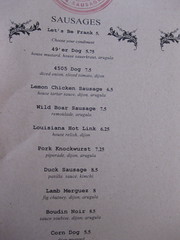 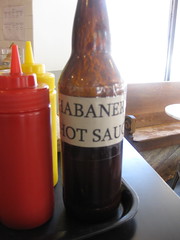 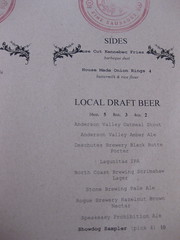 Fine Sausage is the motto underneath Show Dog's mascot with a wide selection of different animals; lamb, beef, chicken, pork, boar, duck and even boudin noir (blood sausage.) They carry Ryan Farr's 4505 hot dog which I've been itching to try. Sadly, I did not get a chance to try it at Broken Record before the husband and wife team called it quits. Fun toppings include kim chee, agave coleslaw and fig chuntney. Additional toppings and sauce range from .75 cent to $1.00 each. Showdog makes homemade mustard, ketchup and haberno hot sauce. The haberno is more tangy than spicy. 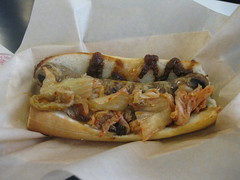 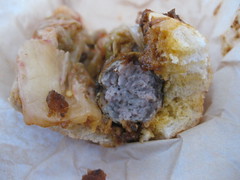 I'm not going to lie I was bashfully sticker-shocked at the prices ranging from $5 to $8.50. I got the $7.50 4505 Dog dressed wit diced onions, sliced tomato, and dijon (I skipped the dijon.) The $8.50 Duck Sausage dressed with pasilla sauce and kimchee. All the dogs are served on Acme sesame bun, I was told by the owner/manager the bread is made especially for them. 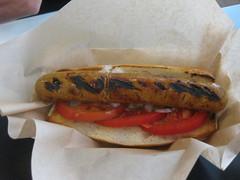 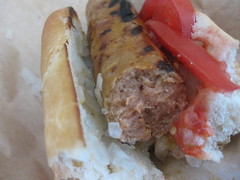 Each dog had nicely thick grill marks, the flavors of the duck and 4505 are distinctive. I like how the dog have a bouncy bite but without the "pop" of a nitrate-like releasing feel I get with supermarket dogs. The kim chee combined with the pasilla sauce had a good crunch with the puree-ish texture of the sauce. I feel a bun makes a hot dog and Acme's is soft inside but the outer crust is strong enough to hold together a drenched saucy hot dog.

I definitely will be back to try the other flavors and hope they will expand the menu with fun flavors such as a Thai influenced dog, foie gras with truffle butter or potato chips!

that sounds fantastic! I really like kimchee on a hotdog, but haven't ever mixed the flavor of pasilla with it. Sounds very interesting. Wish it were a little closer to me for lunch tho!

those dogs look mighty tasty...it's like a more gourmet version of Pink's here in LA