Sometimes, San Francisco feels like a city that sleeps early, NOPA opens until 1am everyday. My dinner at 11pm on Monday is a very Europeanish hour. I’m not the only one who likes to dine later, the house was hustling with young professionals to stylish Susan Sarandon-Tim Robbins couples. I endured a 10 min wait, it made me wonder, during an economic boom would I even get a table by 1am? 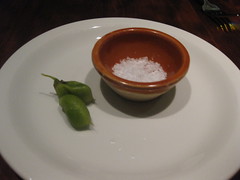 I wanted to sit upstairs to watch the kitchen in action below but it was full. There is one designated server who presents and describes the amuse of the day and takes the dessert order. Since it was so loud, I only hear him say “day, fresh, bean, use, salt".”


We began the meal with a the famous flatbread and house smoked bacon featured on Food Network. The flatbread of the day was bacon, potatoes, scallions, rosemary and yogurt. Once the flatbread is lifted to the mouth, the baked rosemary scent captures the attention. The flatbread was cracker thin and texture, the smoked bacon gave it the smokiness and saltiness with the yogurt as a refreshing contrast; a satifiying portion at $14. 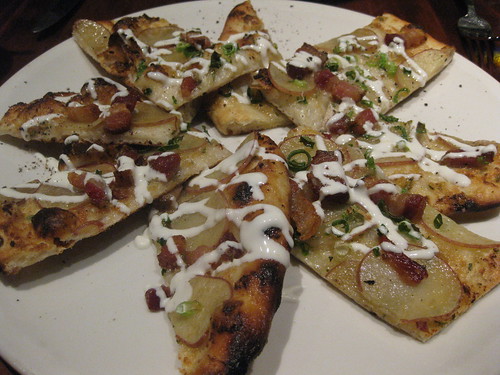 How do you go to NOPA and not order their famous burger? This is the reason I circled the neighborhood for 30 mins looking for parking, my focus was to eat the burger. The $13 burger is made with 1/2 pound Marin Sun Farms grassfed beef served on a grilled brioche bun, romanine lettuce, pickled onions, cheese (I choose chedder) and kennebec fries with basil aioli. 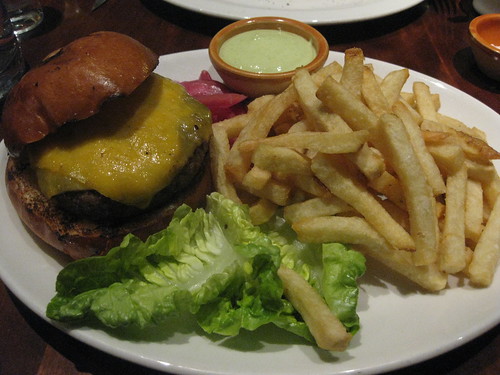 My medium rare burger was cooked a tad bit rarer with the core uncooked. Look at the outer crust of the burger and it is cooked on a very hot fire sealing in the juices because it did not leaked through the bun but so juicy as I was chomping. I will be back again and again. The kennebec fries (I believe the best potatoes for fries) was cooked softer like In-n-Out’s. 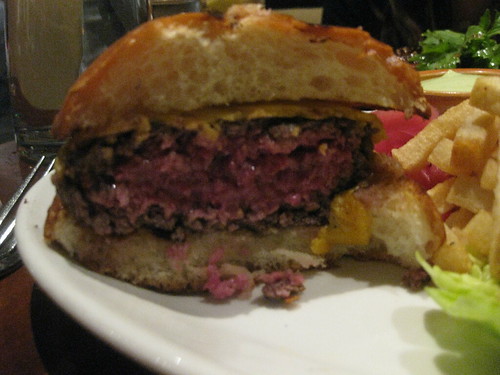 The Country Pork Chop was well recommended by many, so I didn’t pass it up. The $23 pork was served with grilled nectarines, kalamata olives and mustard greens. The pork lightly glazed with a mustard seed sauce to tie the dish together. The blacken seared crust added lots of flavor and the pork “gaminess” was void. The simple grilled nectarines was such a nice departure from the usual apple and pork combo. 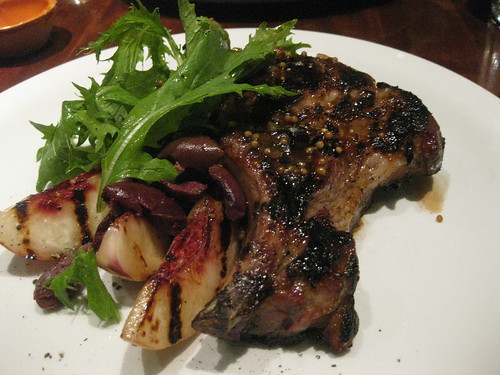 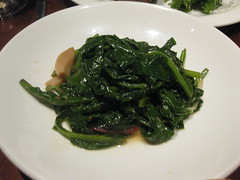 The meal was full of “meats” so a side of $6 sauteed chard with anchovy and lemon was a welcomed neccessary.

The late late night (bed time for most) ended with a $9Sour Cherry Clafoutis. I’ve had clafoutis before written on name tags of bakeries but I asked the designated server to describe the dessert. He said it was, “souffle custard like cake.” The clafoutis was more like a denser less sweet pound cake. 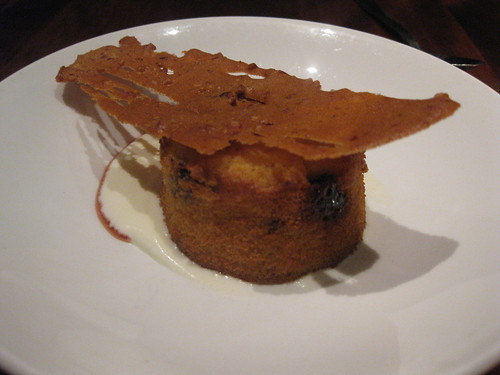 The service was okay, bread is given on request, and much to my surprise ice tea is not refilled for free. I will not order ice tea (filled with nothing but ice) and go for the bluebottle martini next time.

wow, a bluebottle martini at 1 am? I'm showing my age! both the burger and the pork chop sound outrageous, I've really got to get myself over there soon!