What kind of person has room for dessert at House of Prime Rib?

… “that” person would be….me. I had dinner at House of Prime Rib last night, 4 days since it’s been featured on Anthony Bourdain’s No Reservation: San Francisco Edition. As stated before in my previous HoPR post, I absolutely love this place. Although the food was inconsistence for many years , I agree with Michael Bauer that as of late, HoPR is back on its game.

Our reservations were at 9pm on a Thursday night and the house was packed and louder than the Giant’s vs L.A. Dodger game I attended the day before.

Per usual, I ordered the King Cut- medium cooked, spinach, creamed corn and baked potato. Everything was exceptional, from the staple sourdough bread to the mild horseradish. As if the meal wasn’t calories inducing enough we went for dessert because we wanted something “light, sour and sweet.”


The $8 Grand Mariner with fresh strawberries was refreshing covered with a sabayon-like Grand Mariner sauce. The $8 English Trifle was done the same way expect with mixed berries, a small slice of pound cake and whipped cream. 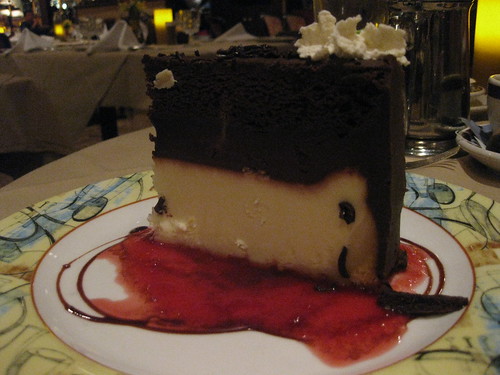 The $8 Fantasy cake is half chocolate cake and half cheesecake on a puddle of raspberry coulis. The cake was rich and washed down well with a cup of hot black tea.

Did we finish our desserts?

I stand and applaud you - bravo! now you have me craving the yorkshire pudding...