2009 was an ever paving path of gratifying goodness. The list of memorable events and food:

Expanded my palate by dining at great non and Michelin awarded restaurants.

Busted my jeans trying to finish the 7x7 magazine - 100 Things to try before you die list.

Happen to dine at Sol Food in San Rafael, CA when Guy Fieri was filming for Triple D.

Became a part of the FoodBuzz family and was invited to several wonderful food events.

I am more aware of local ingredients, sources, and why two flavors are married together.

Food Goals for 2010 - After all I am still learning. I hope to learn more about wine and cheese. I would like to expand my repertoire beyond Pinot Noir, Malbec, brie, and hard cheeses. I would like to learn - what makes a satisfying and mind evoking cup of espresso. I should cook more often, especially since my parents are a walking Vietnamese/Chinese recipe book. And maybe, just maybe I'll have an opportunity to dine at French Laundry and Alinea in 2010.


Scanning over hundreds of food pictures from my Flickr account I picked the 10 most memorable items I consumed in 2009. I had some amazing dishes but the top 10 picks are special. I can still remember the time, conversations, company and lingering flavors associated with the top 10. 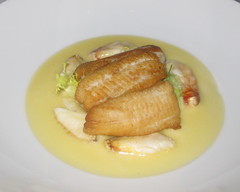 1.) Spruce (San Francisco, CA) - Seared Petrale Sole with Dungeness Crab and Champagne butter. The splash of ocean was a big factor in the dish's harmony. The caramelized crust of the sole still retained the juiciness and flakiness with the flick of my fork. The crab was tender and so sweet, the champagne was light and tied everything together. My all time favorite dish of 2009.


2.) The Slanted Door (San Francisco, CA) - Hong Kong Milk Tea. The Slanted Door at the Ferry Building is popular with locals and tourist. When I tell people I'm from San Francisco, they always ask if I ate at the Slanted Door. Charles Phan's Shaking Beef is his signature; however, I'm more encompassed with the Hong Kong milk tea. There is an art to making the perfect cup of milk tea as demonstrated by the founder in Hong Kong. Slanted Door's version is made with condensed milk giving it a golden sweetness essence. The mixture of tea is pronounced, the silkiness of the tea was amazing. The tea had a quality of expensive fine silk in liquid form. 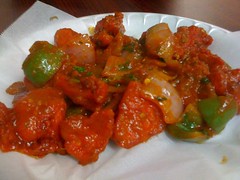 3.) Dosa Cafe (San Jose, CA) - Gobi Manchurian. Located in a small supermarket, serving vegetarian Southern Indian food. This was recommended by the cashier after she clarified if I could handle spicy food. The cauliflowers are fried and then tossed in a tomatoey sweet, sour, and spicy sauce with bell peppers and onions. This dish is obviously influenced by the Chinese sweet and sour pork but so much better; without the goopy sauce and MSG. 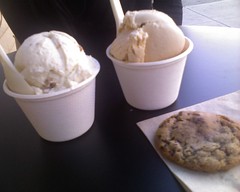 4.) Humphry Slocombe Ice Cream (San Francisco, CA)- Secret Breakfast. Whenever I'm close by I will make a stop at the avant garde Humphry because their selection is unique. I've had a number of flavors from Mr. Slocombe but the Secret Breakfast is my all time personal favorite(after vanilla.) The not so Secret Breakfast is made of bourbon and cornflakes. The bourbon is strong with depth, I could feel my pores emitting the scent after a few licks, counteracted by the sugary coated cornflake crunch. 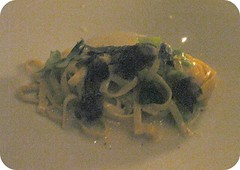 5.) Quince (San Francisco, CA) Tagliatelle, black truffle and cheese. One of my last big meals of the year. Quince is known for making extraordinary pastas and the egg noodle tagliatelle is a prime example. I could even forgo the sauce, it was just that good. Everything about the pasta from the texture, to the way it spiraled on my fork and lastly - the way the pasta felt when it was chewed between the teeth and cheek. 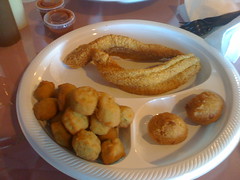 6.)Catfish Alley (Las Vegas, NV) - Fried Catfish. I have a bias for fried catfish because it would conjure childhood memories. But all fried food are not created equal, Catfish Alley must change the oil frequently because there is no oily after taste. The cornmeal coating is almost transparent but enough for a crispy crust. 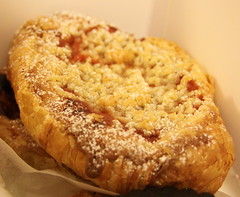 7.) Bouchon Bakery (Yountville, CA) - Strawberry Croissant. I must admit when I'm in Yountville or Las Vegas I stock up on every available baked goods of the day. The Strawberry Croissant is my family and mine favorite. The already-flaky croissant is sliced in half, then smothered with a chunky fresh strawberry spread and topped with a crumb topping (a la coffee crumb topping.) A macchiato is the strawberry croissant's rightful soul mate. 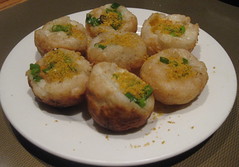 8.) Vung Tau (San Jose, CA) - Shrimp Banh Khot aka Shrimp Pancake, every Vietnamese cook has their own variation but Vung Tau does it well. The Banh Khot is a size of a large meatball, the dough is loose and transparent. The cast iron was heated very hot giving a nice crust, the heart is very sticky; the type that grips onto your lips like a messy first kiss. 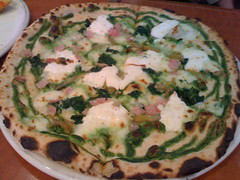 9.) Pizzaria Picco (Larkspur, CA) - Any of their pizza. 2009 is definitely the year of pizza in San Francisco. I've tried some of the major players - Delfina, Cheeseboard, Little Star, Arinell, Gialina's, Beretta and A16. Pizzeria Picco rocks above because of the fresh local ingredients and the thickness of the firewood baked crust to the fluffiness wins. 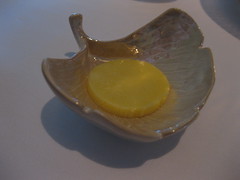 10.) Spring Hill Farm - Butter (Petaluma, CA) - My first taste of Spring Hill Farm Butter at Michael Mina. I did a double taste, "this cannot be butter!" I have only had Supermarket butter and I've been deprived. Local, organic, sustainable farming produces butter so rich, flavorful and creamy almost like an ice cream base. I was told the butter ranges in color because the cow's diet changes with the season.

I received a Canon 50D Camera for Christmas which means in addition to my dreadful writing and opinions it will also include amateur photography in 2010. Oh Dear...

dang girl...you sure do eat out a lot. you're kinda like me :) except you eat better food.

that's cool about guy fieri. did you meet him?

Excellent post, it inspires me to keep trying new things. I often get stuck in a rut... Very exciting news about the camera upgrade!

Great summary of 2009. Can't wait for another year of your culinary adventures!

Happy New Year! You live on the food edge. Enjoy it.

Ohmigosh I can't tell you how much I want a Strawberry Croissant from Bouchon Bakery right now - you make it sound like a bit of heaven! :)