Ad Hoc is my favorite restaurant and like my affairs with men, the restaurant is close yet so far (55 miles away.) Again, like any attractive man, Ad Hoc keeps it exciting and new with a changing menu but keeps the familiarity with 4 courses. The 4 courses usually involves a salad, meat entree (called the main attraction), cheese course and dessert. I wanted to attend Ad Hoc's Monday Fried Chicken Night for over 2 years; like finding a honest man it was worth the yearning.

I called 4 days before Monday and was stuck with a 8:45pm time slot. I asked if I could walk in at 5pm for a table and the host said it was possible. When we arrived at 5pm the host gave us a bit of a hard time before seating us.

We spent the day wine tasting at Opus One and Domaine Carneros but with a stop at Bouchon Bakery for lunch. Like a child in a candy shop, we spent a hefty amount at the bakery including Keller's famous salmon rillette [$25] to enjoy later. Ad Hoc serves Bouchon Bakery's bread, one white and another with a nuttier complex. We had to stop ourselves at one piece because I was saving room for the much anticipated fried chicken.


We began with Salad of Baby Mixed Greens, living watercress, red radish, nates carrots, polenta croutons, sweet feenel vinaigrette. The vegetables were so sweet and fresh as if it was picked from the garden and brought to the kitchen in 2 seconds flat. The polenta croutons bought the crunchy texture and aromatic flavors to the freshness.

Licking my lips with anticipation; the server brought over a whole chicken (8 pieces) piled lazily on a burning hot All Clad tray. Yea,

I know it was burning because I tried to move the plate closer to me, Owww!

The chicken was better than expected, juicy, moist and falling apart even the chicken breast, the crust had the panko texture with big crumbly fragrant crispy bits. The chicken is greasy with only the brown paper on the bottom soaking some of the oil. The chicken was so hot (as in hawt) I was licking my lips all night. 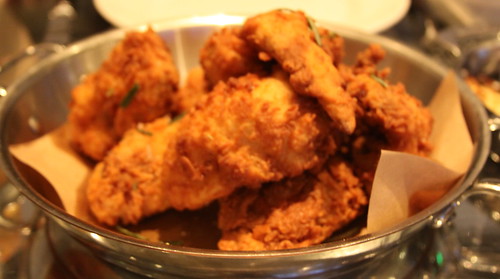 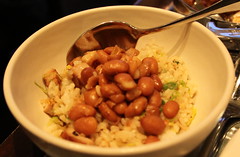 The side dishes included carolina gold rice, hot smoked pork, cranberry beans, brussels sprouts and roasted cauliflower, capers, golden raisins and pine nuts. The side dishes almost out shined the main attraction. The rice and beans was exceptional with the smoked pork and starchiness working together. The deep purple hue from the cauliflower only made it more appetizing with the crispy corners. We asked for seconds and the server was accommodating and quickly brought out more. 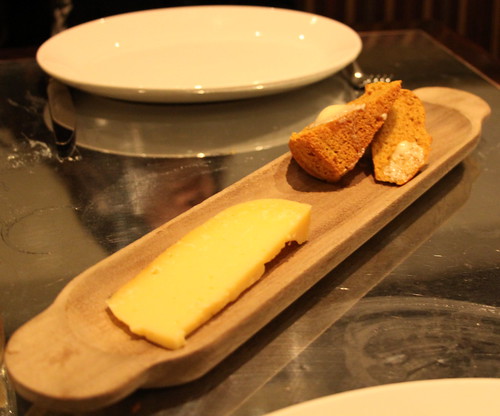 The Cheese course for the night was Pedrozo Dairy Northern Gold served with butternut quickbread. A semi hard cheese with tones of cheddar.

I'm an ignoramus when it comes to cheese,

I'm working on becoming at least a C student. By the way, the bar seating has their menu a la carte. 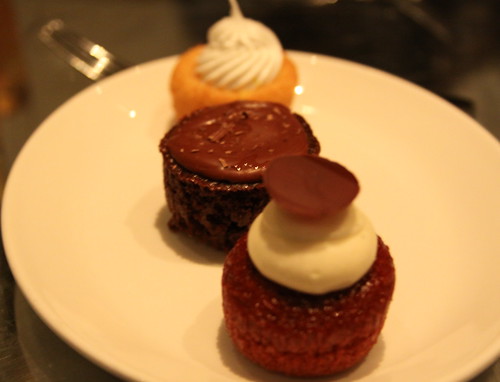 The sweets were three, I must repeat THREE mini cupcakes - Red Velvet, Lemon Meringue, Peanut Butter Devil's food. Each cupcake was moist and deeply flavor so I could rightfully distinguish each one even though I was so full I could tip over. 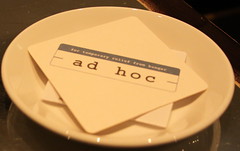 Like a broken record, Ad Hoc is my favorite restaurant and like any needy girlfriend I will keep coming back for more. I also have the Ad Hoc at Home Cookbook, can't wait to try the buttermilk fried chicken recipe at home!

First, words cannot describe how much I adore you for comparing yourself to a needy girlfriend when it comes to eating at Ad Hoc. Second, ohmigosh take me with you next time! The chicken, the cupcakes - I need, I need, I need!! :)

You know, they usually will give you a little more if you ask. So you could have probably done so with the salad. Also, since it's served family-style, is it possible the larger bowls of salad you saw were on tables that had more than two people? I love fried chicken night there. I try not to eat a lot of fried food, but for this I will make an exception. :)

You are absolutely right, they offer seconds. I edited the post; the larger bowls were also on two top tables. No hard feelings with Ad Hoc, just injecting some humor in the review.

I want. Yes, I want! Whatever Chef Keller serves, I'll eat it! :) Let's go when you're free Bonnie!

yountville? where the heck is that?! i've never heard of it.

love the name of the restaurant.