I stumbled upon a unique angle of the George Washington Bridge in New York on National Geographic. The little red lighthouse was made famous by the book The Little Red Lighthouse and the Great Gray Bridge by Hildegarde Swift and Lynd Ward. Perched on the corner is a little red lighthouse against the twinkling bright light of high rise towers. 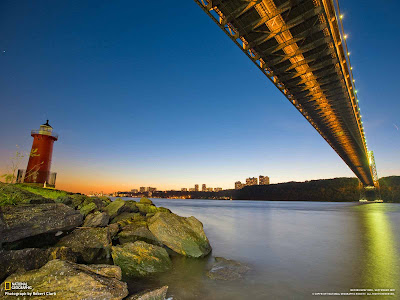 I did not read this story as a child and thought it was inspiring and the picture is mesmerizing. I will put it on my to-do list whenever I travel to New York City, among a long list of things.

* I loved the story and photo so much it is my computer's wallpaper. You can download the image from National Geographic

Ohmigosh I so adore this picture - it's going in my inspiration folder right now! And I NEED to go to New York City - love!! :)