Lavo Nightclub at the Palazzo is also a Restaurant?

While en route to CUT in the Palazzo, my friend wanted to check out Lavo's menu before confirming our decision for dinner. Lavo is a restaurant and nightclub by the same owners of Tao. If you don't already know, Tao sits at the #1 position for top 100 restaurant for gross receipt coming in at a whooping $68 MILLION for 2009. 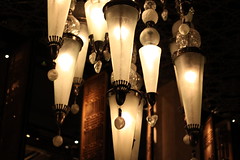 Lavo is much smaller but similar to Tao's decor and mood, dark woods, open space, large chandeliers and the bridge to the club is outfitted with a row of faucets turned on with running water. My friend wanted to dine at Lavo for the "scene" (she also enjoys dining at The Ivy in Los Angeles.) I agreed since the menu looked reasonable in price and I wanted to eat kobe beef in some form during my weekend in Las Vegas. 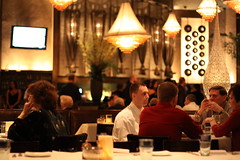 We were immediately seated with the place half full at 5:30 pm, mostly older middle age couples drinking cocktails and eating a plate or two, unlike the us - three girls who ordered way too much - especially with a long night ahead (take note, it was a bachelorette party weekend.)

Our server, dressed in a white button shirt and suspenders was very enthusiastic, he talked a mile a minute and incredibly proud of the food at Lavo. I was taken by surprise at his confidence, speaking with firmness when describing the food. Although I had moderate expectation for the food, his personality was key to elevating the experience. I wish more restaurant had more enthusiastic servers, it would make any meal much more enjoyable.

Our server pronouncedly placed the toasted bread with marinara on the table, "it's all about the sauce" he said which will be repeated several times throughout the meal. Nice crusty bread, much more pleasant than the pan epi at Bouchon Bistro at brunch.

Kobe Beef Carpaccio ($24) served with a parmesan crisp and greens is classic with salt, pepper and olive oil. The beef was tender and by golly if my mother did not instill "sharing" as a child I would hoard this dish to myself. 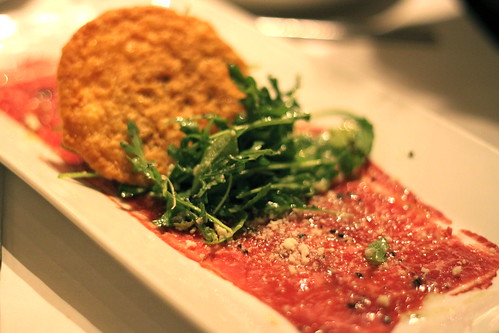 Yellow Tuna Fin Carpaccio ($14) served with capers, shaved fennel and fried onions. The fish was completely bland and tasteless and the onions were overpowering. The dish was more about the soft texture contrasting the crispy onions. 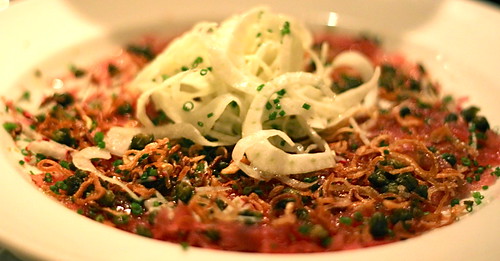 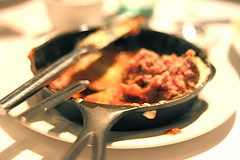 Our server insisted we order their "famous" meatball made of A5 Kobe ground beef and the size of a "grapefruit." The Meatball with whipped Ricotta ($20) arrived in a skillet on a puddle of the same marinara and indeed shaped like a "grapefruit." The meatball was tender and slightly under seasoned but he did flip open the lid of fresh parmesan cheese to sprinkle onto the dish.

Risotto with Braised Short Ribs ($26) was also described with flair and elaborate hand movements. Our server described each dish as if Lavo invented the recipe. I've seen many of the items on the menu at many many restaurants but I love how the server emphasized the dishes as if it was my first time dining at a restaurant. He would be an amazing guide to a restaurant newbie. The risotto was cooked throughly but supremely over seasoned topped with too much crispy onions again; however the meat was cooked until it was broken and tender. 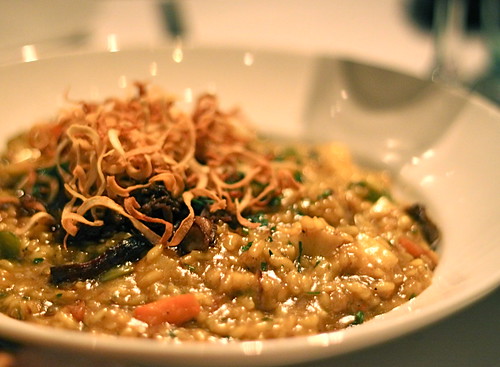 We ordered the Carne ($24) brick oven pizza prized as over "2 feet" long. Since Lavo was a nightclub in the evening and I'm in Las Vegas I couldn't help having dirty thoughts. The pizza had ample toppings of prosciutto, pepperoni and fresh mozzarella. The crust was thin, crispy but still had a chewy tear. We had tons leftover for a late night/early morning snack. 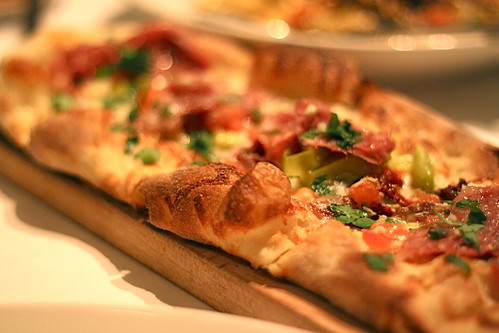 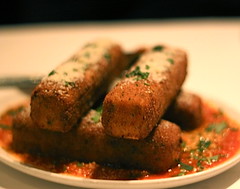 The Polenta Fries ($10) are categorize in the potatoes section, served with more of the "all about the sauce" mariana. The polenta was very creamy and I could slice the fries with floss if desired.

The Sauteed Broccolini Rabe ($10) was still tender and green, taken out of the pot at the perfect moment. I adored the cheese cloth wrapped around the lemon slice, very old school and rarely seen anywhere.

We had our heart set on eating the bachelorette cake (red velvet) back in the hotel room but the server, again, firmly insisted we order the oreo "beignets." These are his quotes, "oreo stuffed into dough and fried" "many ladies describe it as orgasmic." I never describe food as orgasmic and when he label the oreos as "beignets" my mind said "You mean deep fried oreo like a state fair." 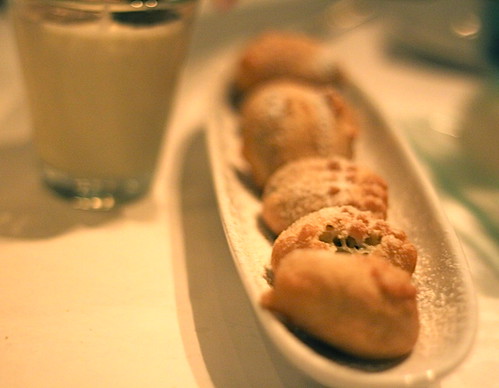 This is the example of our server describing each dish to a restaurant newbie and how much more fun he made our meal. We went ahead and ordered the ($8) oreo "beignets" served with a vanilla milkshake, rich beyond words especially dunking them in the cold vanilla milkshake. The oreo was the hot spa going in for a cold water bath dunk. 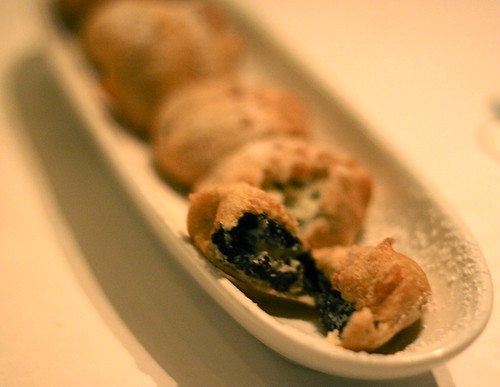 We also ended with ($8) sorbets to cleanse our palates since major food coma was creeping. The flavors included passionfruit, blood orange and lemon served with almond cookies and stabbed with sugar decorations. 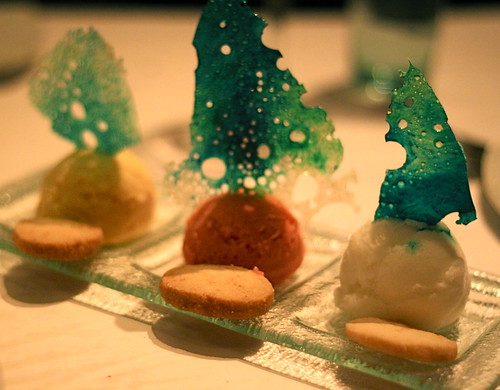 Tip: If you are planning to dine at Lavo and later attend the nightclub, tell any one of the servers or runners. We asked our food runner about the nightclub and he quickly took down our number and got us in touch with a club promoter who put 15 girls on the list to enter for free by 10:30pm including open bar. A sweet deal.

You are truly a girl's best foodie friend. That little tip at the end about the nightclub/dinner was something one would have had to find out on their own after visiting a few times; you just made it so much simpler. I adore you - and your taste in divine foods!! :)

oh my God... the food looks amazing!!! have a great weekend!