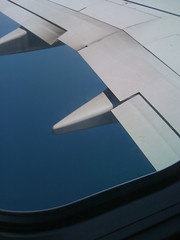 Chicago stole my heart two years ago. I stayed in Riverdale, IL with 'Aunt Dodo' a woman who is independent, sweet, fashionable (especially her taste in furniture, imagine Beyonce's furniture from Dreamgirls) and kind. I stayed a little over a week with my best friend and visited almost every neighborhood by Metra, "L" or by foot.


Flying over the Great Lakes 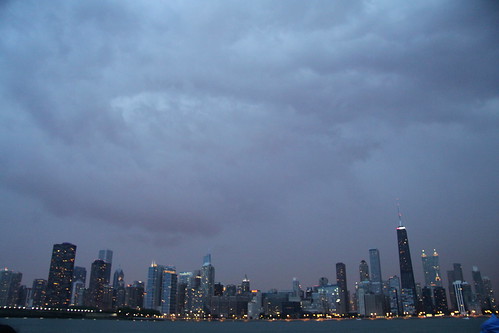 Thundering Chicago at Sunset
I remember riding the Metra every morning. The first level had side by side seating and with a little effort through the narrow staircase it lead to the single seating 2nd floor. The train employees dressed in uniform walking around punching tickets. I would gaze out the window during the 40 minute ride and watch the world speed by with Brick Bungalows, black steel tracks, and tiny rocks flickering in every direction. The whole scene felt like "Brief Encounter." A girl could fade into daydreaming once in awhile...


There is something magical about Chicago, the twinkling Skyline shuffled with skyscrapers all screaming for attention within the pack. The river weaving its curves around the city supported by movable bridges. The natural flow or 'chi' (no pun intended) no doubt it was all figured out by Daniel Burnham.

Robie's House
Speaking of Architects, the abundance of Frank Lloyd Wright's work in ChicagoLand is enough to occupy one's time for a day or two. First stop was Robie's House on the University of Chicago campus. Afterward, I hop and skip to the FREE Oriental Museum which is only a block away. Rockefeller was a financial supporter and the museum is grandeur with mummies, King Tut, artifacts from the Assyrian era, and I'm only naming a few. 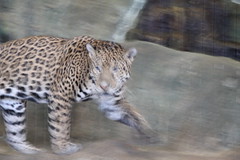 
I also visited Frank Lloyd Wright's House and Studio in Oak Park, IL. The interior tour of his home and studio only inspires me to make my 'Falling Water' trip to Pennsylvania become a reality. Ernest Hemmingway's childhood home is only a few blocks away too. The serene Oak Park neighborhood and history is enough to make my skin crawl-in a good way. 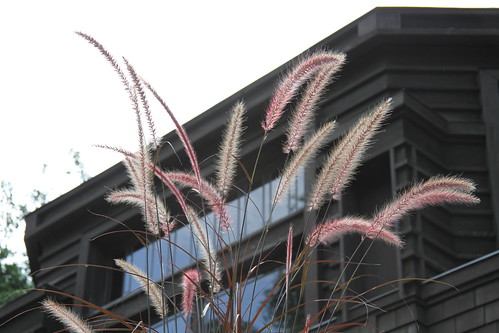 The outdoor art in Chicago makes me feel like a little kid competing to find the most Easter eggs within the time limit. Two years ago, Magnificent Mile displayed art work from local fashion designers who designed dresses made out of trash (my icon for "Diary of a Bridesmaid's diet.") I was hooked! I wanted to discover all the dresses and my heart leaped when one was spotted. 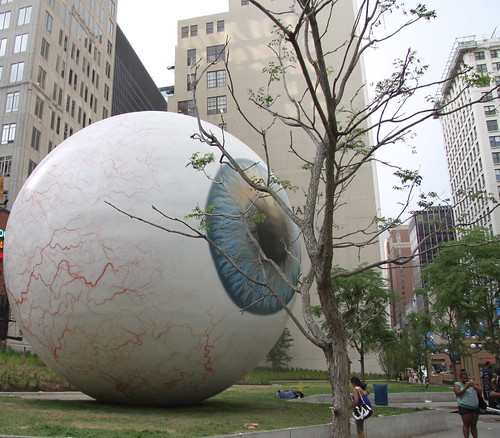 The Eye by Tony Tasset, South Loop, Between State and Van Buren St.

The Eye and The Cardinal Flags by Tony Tasset are the current attraction for 2010. His wife, Judy Ledgerwood who is a contemporary artist currently has her work displayed in the Modern Wing of the Art Institute. Amazing couple. 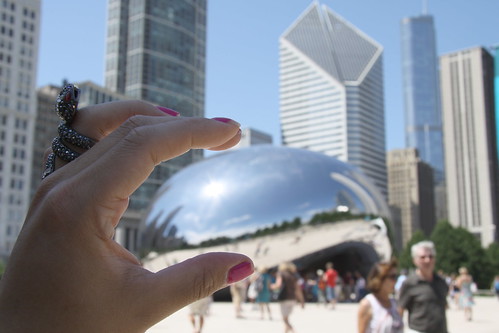 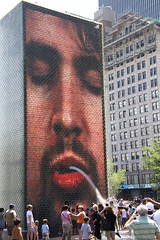 I revisited the 'Bean' this time trying to squish it - to feel in between my clasp. The Crown Fountain makes me happy, just that. Happy. The hot beating sun with children of all ages, including myself splashing the grounds for temporary cool relief and everyone screaming in sync with surprise when the fountain spits. 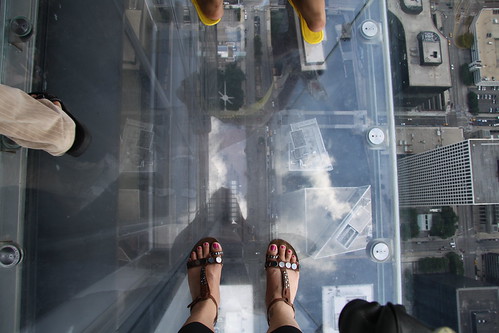 
I visited all the tourist attraction last time but return to the Willis Tower to stand on the skydeck. Aside from ponying up $16 for entrance and cattling ourselves through the line for over 40 mins; I had a wonderful time stepping onto the glass. Especially, while I was standing on the windy skydeck a father was jumping up and down hard to scare his child. 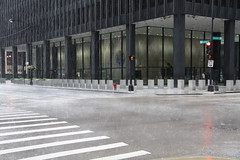 While walking the Loop we were caught in the downpour in the middle of July. In addition to the heavy rainfall we bumped into the movie set of Transformers 3. The South Loop of Monroe Street had overturn cars, blasted holes in the pavement, and smoke. I asked security and was told they were filming aerial shots for the next 2 weeks in Chicago. At first glance I thought it was a extremely bad accident.


Caught in the Sheets of Rain 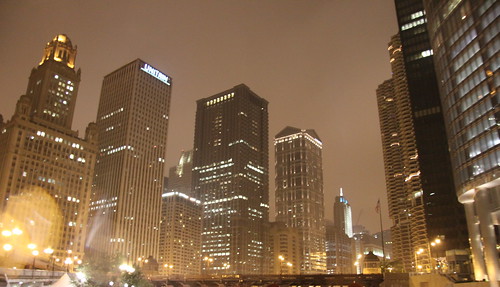 The night was young and the rain was rough with spurs of heavy gushes to gaps of clear skies. I decided to brave the elements and stay on the top floor for majority of the night. The sky was a warm shade of blood orange, the clouds were striking, I was swaying like Charlie Chaplin from 'The Immigrant' almost losing my shirt. Still an incredible night. 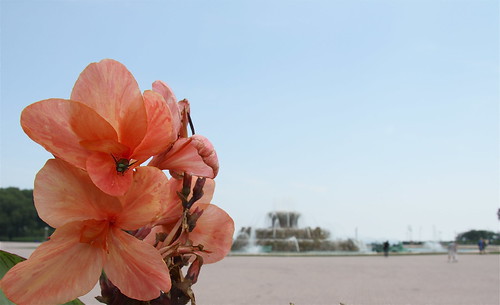 One of my favorite neighborhood is Devon Avenue in West Ridge. The ethnic grocery store, clothing store specializing in Sari and Bollywood like jewelry, sweets, vegetarian and Indian/Pakistan restaurants, video rental, beauty salons and books. The businesses reflect the large Desi population. 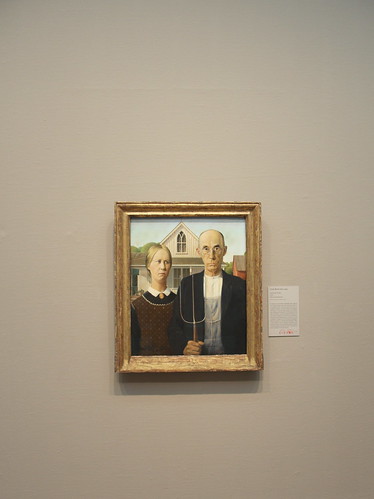 The last two nights I stayed in Humboldt Park with a friend. The neighborhood was rougher around the edges but with character. Sitting on the patio, shooting the shit with the roommates under the glimmering (I believe) Summer Triangle.

The food - Chicago has deep dish pizza, Italian beef and hot dog. I had them all including Molecular Gastronomy, offal and pig centric. In the coming weeks I'm going to post some of the food I had in Chicago.

Places I dined at:

The next time I return, I would like to visit Alinea again, Achatz's Next and Aviary Cocktails, Moto, Schwa, Avenues, Hot Chocolate, More Cupcakes, Hot Dawg's, BlackBird, Purple Pig and so many more. There is never enough time...

Chicago, in some way, during lapse of moments remind me of Charlie Chaplin's Modern Time. The steel structures, steel tracks, steel bridges all by products of the Great Chicago Fire. Like Chaplin at the end of the movie where he walks into the sunset (one of my favorite movie scenes of all time.) The photo below is the my homage to the Tramp's walk off into the sunset. Until next time... 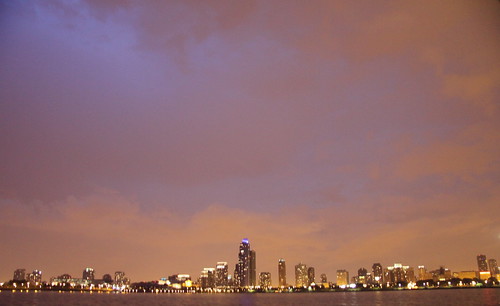 Walking off into the Sunset...

sounds like you ate very well! I've never been, but keep hearing about all the great food and now these sights all look so wonderful too. I was in the midwest too last week, the combination of rain and summer is so unreal to me! Fun post, great pictures!

Foodhoe, Chicago has so many beautiful sights and landmark in addition to the food scene. The rain did surprise me in the middle of summer.

I can understand your feelings for Chicago. So which place had the best Italian Beef? I haven't tried it yet. I need to go to Hot Doug's.