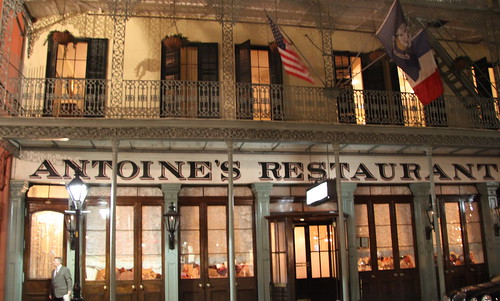 Antoine's is definitely worth a visit for the experience, and I had a great one. Antoine's is the oldest family own restaurant in the country. The restaurant opened in 1840, 160 years young. I was looking forward to trying all the "famous" dishes - Oyster Rockefeller, Oyster Foch and Baked Alaska. 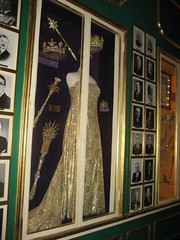 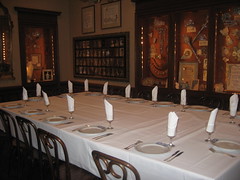 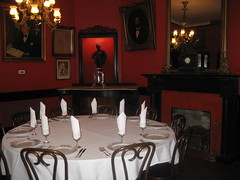 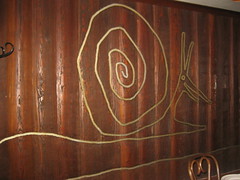 Word of advice: Ask your server for a tour. You can wander the 14 rooms by yourself but the server will fill you in on the tidbits. I saw the secret passage used during prohibition times, Mardi Gras queens' tiaras, one of the longest wine cellar where Antoine's lost over 2 million dollars worth of wine after Katrina and an original Einstein light blub. 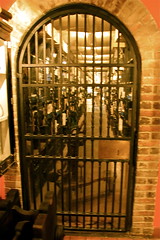 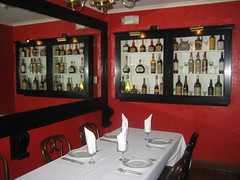 Left: Wine cellar reaches to Royal Street; they lost over $2 million of wine after Katrina
Antoine's website is full of information and history about the restaurant. Click here.

I emailed the restaurant for a reservation and since I did not receive a reply I called. The reservationist was not very friendly on the phone. We arrived an hour early for our reservation and the maître d could not find our name on the list. However, we were immediately seated and despite the minor hiccup we were on our way to a wonderful evening... 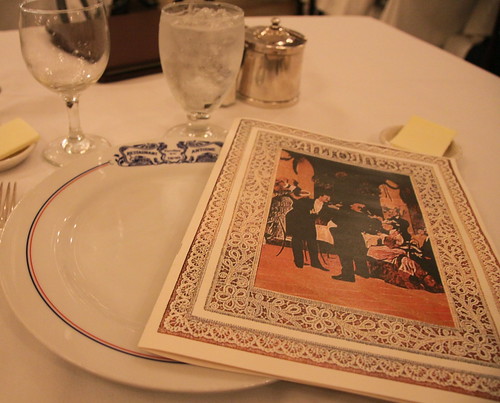 Our server introduced himself and welcomed us to dinner. He was a very young man compared to his colleagues, all of the servers made us feel like we were dining in their home. 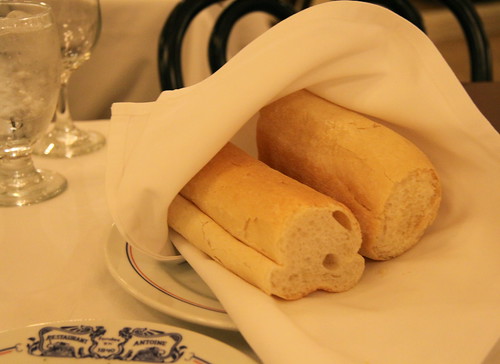 I was anticipating the famous 13.75 Oyster Rockefeller, created at Antoine's and appropriately named after John D. Rockfeller. The dish was named after the Baron because it was so rich. The oysters had an ample amount of topping which was bubbling and fragrant. Antoine insist there is no spinach in the mixture, I think the color and flavor is from parsley as it had almost a licorieness. The oysters played second fiddle to the buttery rich topping. 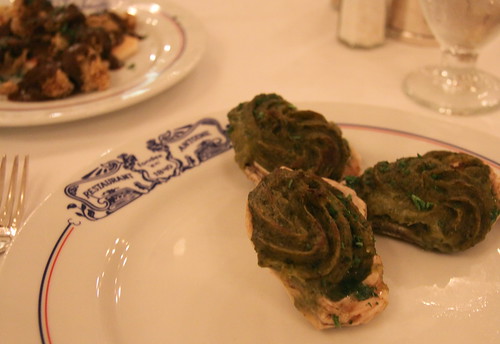 The second oyster course was the 13.75 Huitres a la Foch - cornmeal crusted oysters on toast with pate foie gras and lushly drizzled with Colbert sauce. The sauce is an amped up hollandaise sauce with an addition of Sherry and worcestershire. The Oyster a la Foch recipe is available online and I will be making it at home very soon. 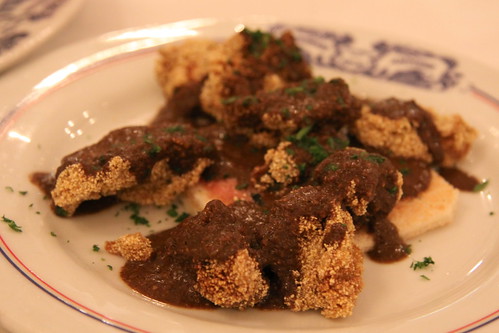 After the succulent dishes we follow up with the 8.75 gumbo creole with blue crab, oysters and gulf shrimp. The aroma from the gumbo was marvelous as it was reminiscence of clam chowder with darker and nuttier notes. 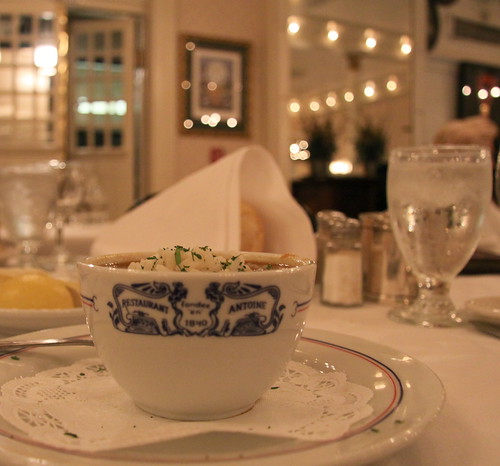 Antoine's name stamped on everything 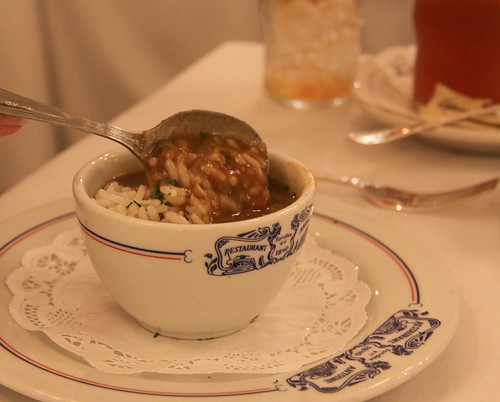 The main course for the night was Crabs mous frits - fried soft shell crab with melted butter. We asked for rémoulade to dunk the critters, I noticed a few restaurants in New Orleans made rémoulade without mayo. I like it without the mayo as I could taste the natural flavors better. 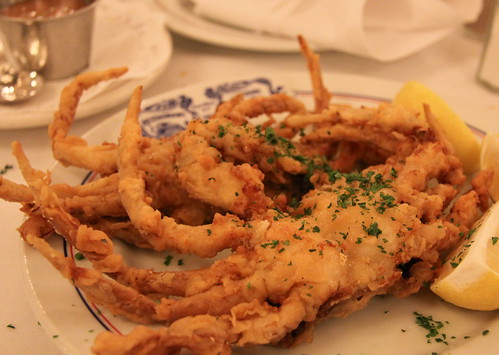 We order the 6.75 pomme souffle to accompany our soft shell crabs. The potatoes were sliced thicker and crispier than Galatoire's. I like the sensation of biting into the crispy potatoes, then my mouth meets air, then my mouth meets potato again. There is a unique way to fry potatoes to make it "puff" I will have to try it at home one day. 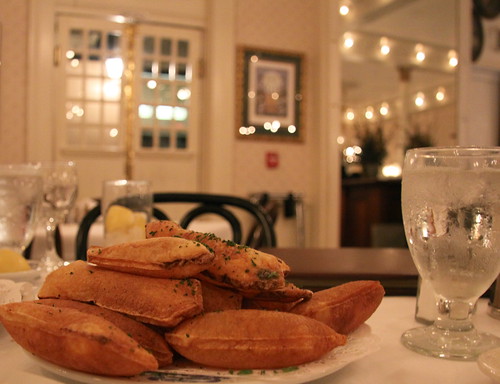 The pièce de résistance was the 17.50 Baked Alaska inscribed with the founder's name. When requested, the restaurant will write a special message. I wonder how many "Will you marry me?" have graced the dessert. The dessert can serve 4 people or 8 girls who eat like they are on first dates. 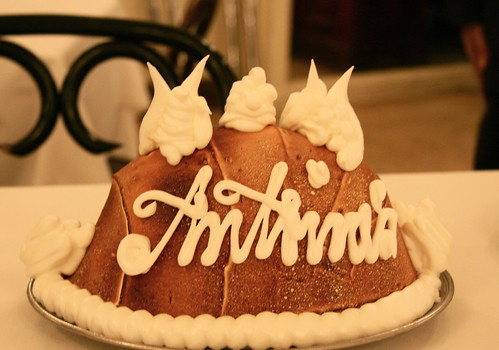 Baked Alaska is one of my all time favorite dessert and it is rarely seen in a restaurant. I usually have to make it at home for my cravings. Antonie's Baked Alaska is a big mound of vanilla ice cream, encased with pound cake, smothered with meringue and torched until golden brown. I love contrasting textures and the Baked Alaska has it all - tacky brown merigue, airy un-torched meringue, crumbly cake, lucisous ice cream and it also fulfills the hot and cold temperature. 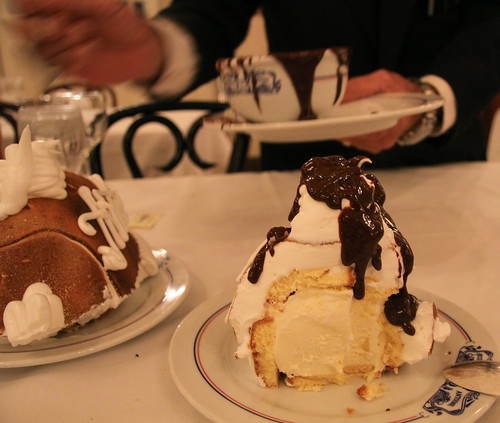 The finale of the night was the 8.75/person Cafe burlot flamed brandy coffee. The cinnamon and clove infused brandy is lit on fire and our server raised the flames higher and higher. The server even created a ring of fire on the table before extinguishing it with coffee. Highly theatrical. 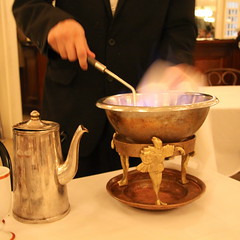 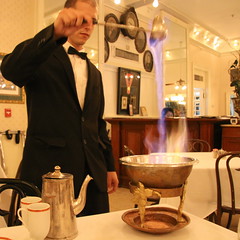 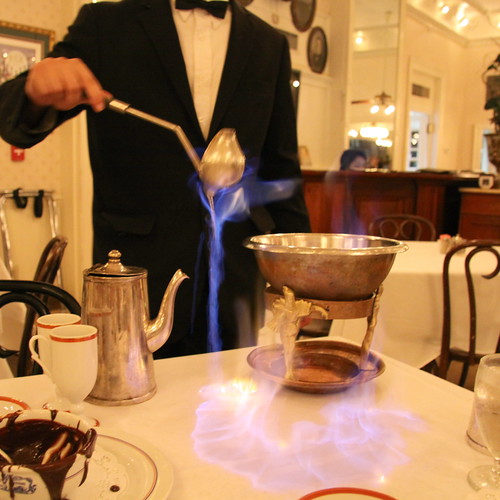 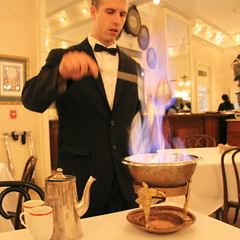 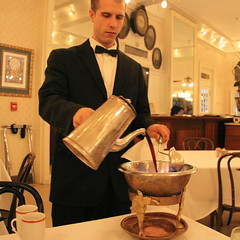 Cafe burlot means devilishly burned coffee and adorably served in devil cups. The coffee brandy is very strong, it hit me hard right in the kisser. 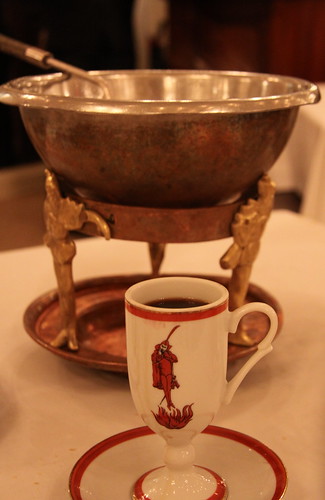 As we went on the restuarant tour, our server told us Bruce Willis dined last week and Nicole Cage is a regular. When I asked him which room did Anthony Bourdain film in, he asked, "Who is he?"

what a great spot! everything looks so interesting, I still can't get over the Oysters Rockefeller, I've never seen them before, the topping sounds very intriguing. And I've never had baked alaska before either, what a decadent sounding treat!