Running up the "Rocky Steps" after the Franklin Fountain, Philadelphia 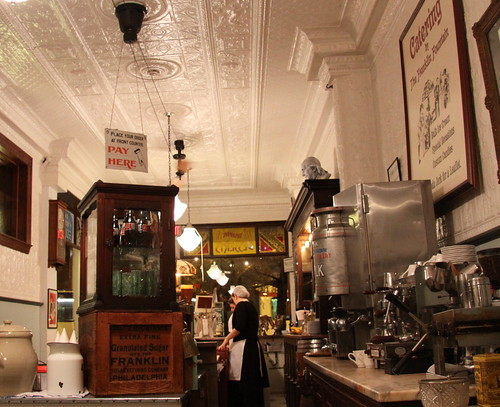 After our late lunch at Garces Trading Co. in Washington Square we walked to Olde City neighborhood for dessert. The walk was brisk since we stopped by a wine and clothing boutique along the way.

The Franklin Fountain has been featured on a few food television shows for their authentic old school ice cream parlor. The owners, the Berley Brothers are part of the theme with curly mustaches, stripe vests, and flat top hats. I was drawn to the Franklin Fountain because it reminded me of the movie 'Pleasantville'. 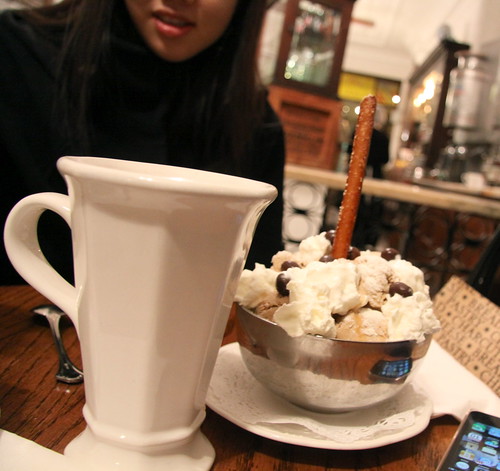 My favorite character was not the protagonist but the soda fountain owner, Bill Johnson played by Jeff Daniels. He was an artist whose creativity is hindered by the conservative 1950s TV land. My favorite scenes - Johnson painting a portrait of Betty (Joan Allen) and wiping off her black and white makeup...it was sexy. Sexy without kissing, sexy without Matrix-style slow motion, sexy with their raw vulnerable emotions.

Ice cream is sexy and we fulfilled our desires with the "Lighting Rod" as explained on the menu, 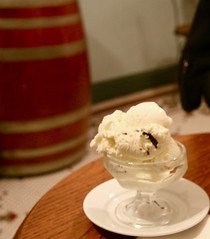 "A dark chocolate brownie surmounted by COFFEE ice cream bathed in a DOUBLE-SHOT of ESPRESSO and peppered with chocolate covered espresso beans, sweet coconut flakes and finished with a pretzel rod.

Will surely ELECTRIFY even the most enervated." 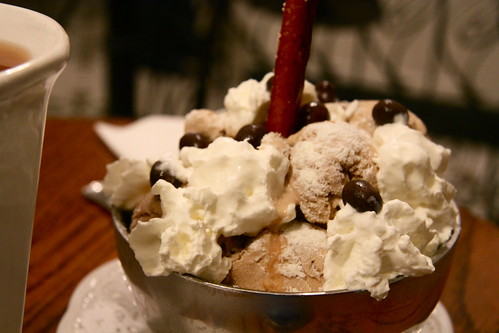 A video below of our server putting together our order:

San Francisco is lucky to have so many heavenly ice cream shops - Bi-Rite, Humphry Slocombe, Mitchell's, Ici, Joe's, Mr. and Mrs. and many more. The Franklin Fountain is unique with their many sundae and split combinations and the atomphere is a plus.

After all the caffeine consumed in dessert form, we went to the Museum of Art at midnight to do the touristy "Rocky Steps" with the "Eye of the Tiger" song playing in my head. I also threw up my arms in celebration and Oz happen to call at that very moment (who is a huge Rocky fan) could not stop telling me he was rolling his eyes. 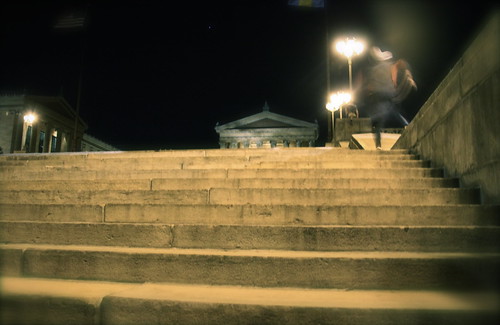 Running up the "Rocky Steps" at Midnight, Museum of Art, Philadelphia
Laughing at ourselves, we drove toward the Boat House Row for the scenery while listening to Kokia's cover of 'Desperado'. Magical night.

Doesn't it make you wish for a boat?

I've walked up those steps...had to think of Rocky at the time :)

OMG, that is sooooooooo cool. I totally want to run up the Rocky steps too (and eat ice cream).
*kisses* HH

I've never been, but that's the hubs' birthplace, maybe one day... especially for one of those sundaes! Love the photo of the rocky steps, good times.