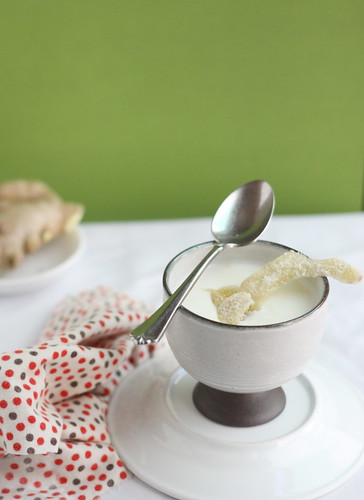 I'll have to write to Harold McGee or Alton Brown and ask about the chemistry in milk and ginger that makes the ingredients miraculously gelatinize. The milk pudding firms up in the refrigerator after only 5 mins, I scratched my head in amazement like I did as a kid baking cakes in a easy-bake oven. 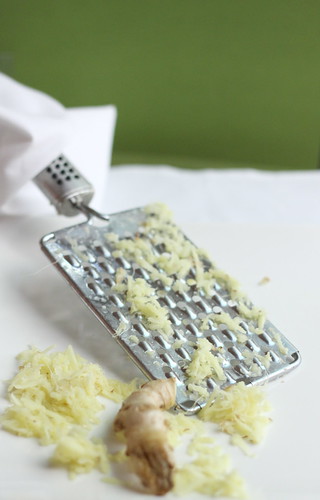 Use a 10-14 oz knob of old ginger and run it through a grater. Grate the ginger in the smallest hole possible, a microplane works best. Put the grated ginger in a fine mesh sieve, use a back of a large spoon and press the ginger to extract the juice and reserve. Bring the milk to a scalded boil or microwave the milk in 30 second intervals until tiny bubbles form on top, do not boil the milk. Put the scalded milk in one pitcher and mix in the sugar. Pour the milk back and forth 8-10 times between two pitchers to aerate the milk.

Spoon a tablespoon of ginger juice into 4-6 oz ramekins and then spoon the milk to the top.

Chill the milk pudding in the refrigerator. The custard will set in about 5 mins but wait an hour or more for a cold refreshing dessert. Garnish with homemade candied ginger (optional.) 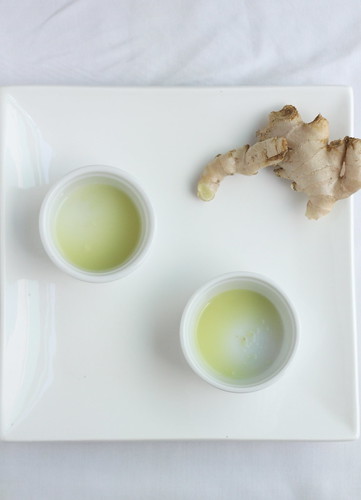 *I use organic low-fat milk and the pudding sets up very nice and firm. I have not use whole milk but I assume the pudding would be more rich and firm with the addition of fat.

**Use old ginger i.e. ginger over 10 days old since purchased from the supermarket. The older the ginger the firmer the pudding. Young ginger does not set very well, the pudding becomes very watery and loose. Do not even try making the pudding WITHOUT any ginger, the pudding will not set at all, the results will be chilled sweet milk. 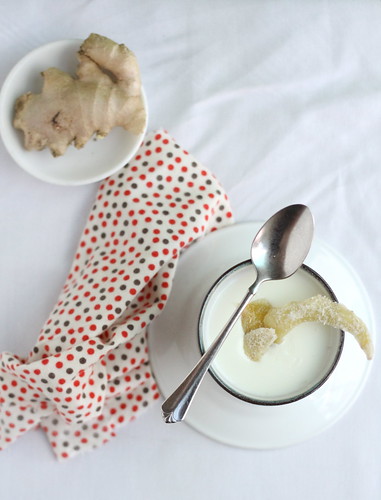 This recipe really impress and the ingredients are almost always on hand. I think it is a great recipe to make when there are impromptu guest(s) visiting. Try using cute bowls to make the recipe even more fun.

This is amazing--ginger as a setting agent? If you do find out more about this, please post an update!

I've never drank spiced milk but this looks promising, looking forward to try it out. Love the photo.

This.... really works? I mean, I believe you but it astonishes me because it's really SO simple! Love it already and I am going to make this in about 11 days as I yet have to buy more ginger. ;)

When I read 10-14 oz of it I first went like "oh my" but then I realized you just use the juice and you had me hooked again ;)

This recipe REALLY does work, it amazed me too. The milk pudding has become a regular in my cooking schedule. Please do an update once you have tried this recipe.

Hmmm, that is so intriguing, but I love the simplicity...that is my kind of cooking! Sounds refreshing and delicious