McNoodle House, Cattle Cafe and Kam Do Bakery. Richmond, BC 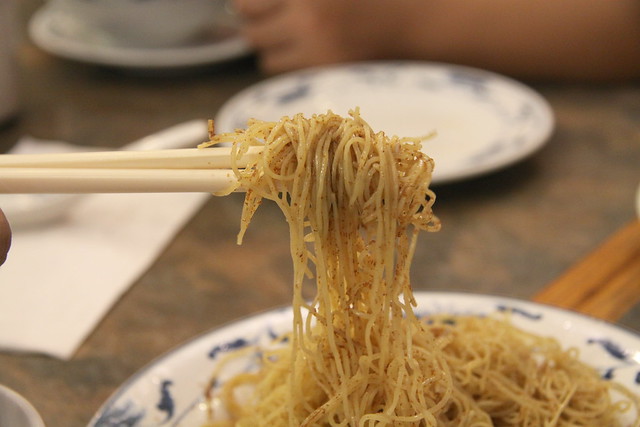 
When McNoodle House first opened it was named Mak's Noodles without any relation to the famous Mak's Noodle in Hong Kong. I don't know if they changed the name because of new owners or because they were forced by Mak's in Hong Kong. Mak's is so famous they have their own Wikipedia page (a quote taken from the Wikipedia page) and since a child I've heard about their wonton noodle soup. I haven't been to Hong Kong and hopefully make it there in 2013. Trying not to stray off topic, McNoodle was highly praise by my Dad when he dined there over 7 years old.

7 years later, he returns to curve his craving for Mak's which has been building exponentially over the years. Like Mak's in Hong Kong, McNoodle is known for their wonton noodles and there is a constant (albeit short) wait for a table no matter what time of day. 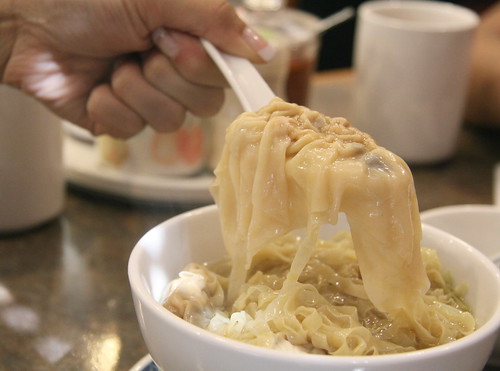 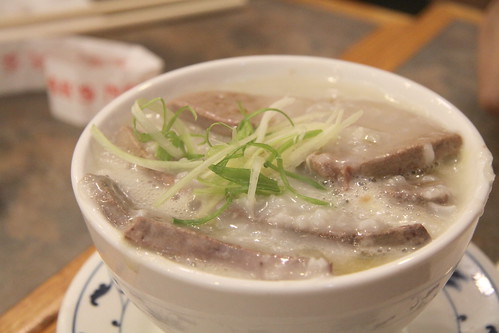 To begin our day before heading out to Granville Island and do some very tourist sightseeing we started with the beef liver congee. Then shared the shrimp wontons, shrimp and pork dumplings, and shrimp roe noodles.

The dishes were okay but nothing to fawn over for 7 years. My dad proclaim it is not the same with disappointment in his voice. The broth's sweetness is from MSG (not complaining, what is Asian food without a little MSG) but overly too pronounced for my taste buds.

My uncle highly recommended the shrimp roe noodles --- thin egg noodles with a sprinkle of dried shrimp roe. He instructed me to pour a little broth over each bite to soften the dryness. Simple but explosive of umami richness. 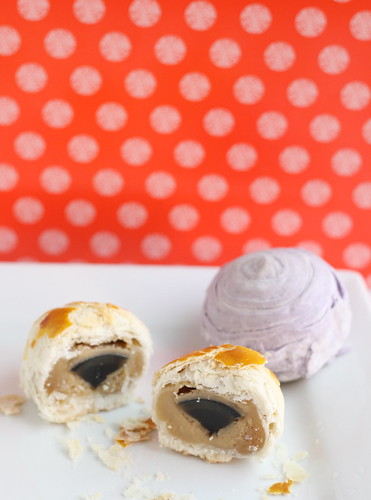 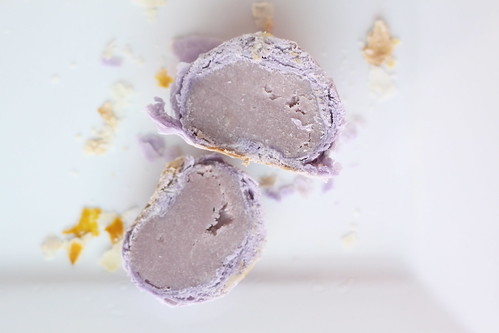 After McNoodle House we walked a few doors down to Kam Do Cafe, a restaurant serving Hong Kong style food but we were there for their bake goods. Kam Do is very famous for their wife cakes, along with the preserved egg pastry and the taro pastry. One of the best wife cake I've ever tasted, the winter melon paste is not sweet with a golden light finish and the flaky crust doesn't fall off after one bite.

We were most enamor with the preserved egg pastry. The versions I've previously consumed made me dislike the pastry even though I love preserve eggs. Kam Do's version is far-flung from what I've experienced. The lotus seed paste is also not too sweet and light without the heaviness of a brick texture. The dough is flaky but thick enough to hold up against the strong preserved egg nuisance. I brought back a few dozens for my friends. 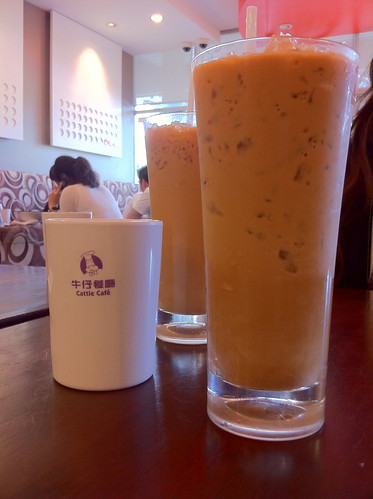 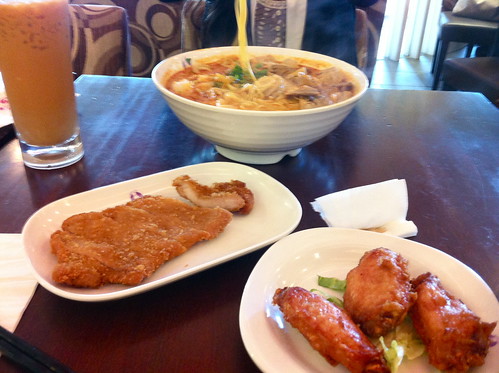 
One night for a late night dining option (instead of going to 24 hour No. 9 restaurant) my aunt took us to Cattle Cafe. She said it is a new concept where one can pick your own toppings, type of noodles and broth. For about $10, a set menu includes a drink and a bowl of noodles. I picked the udon noodles with fish balls and pork skin in a Spicy Szechuan broth and my sister picked ramen noodles with braised brisket and pork intestines in a Laska broth. There is an option to add sides dishes for an addition $1.50. We added the chicken wings and fried pork chop. 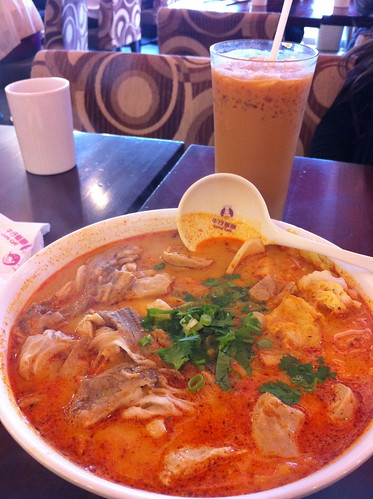 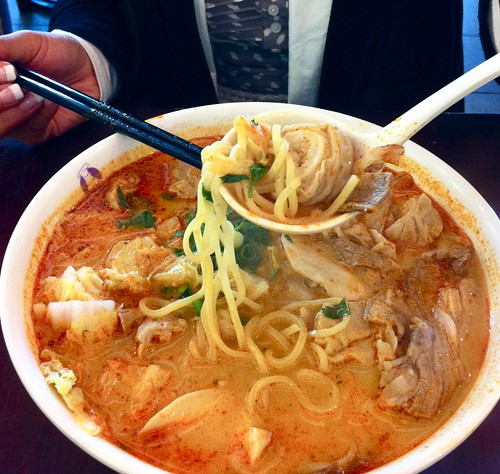 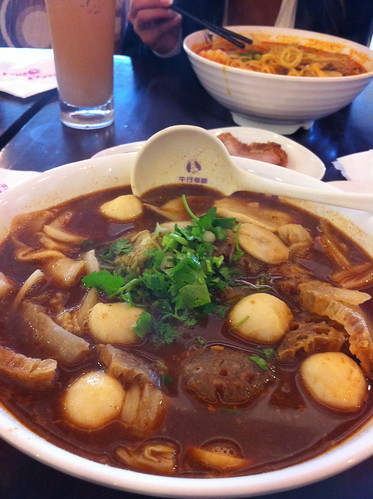 The best part of Cattle Cafe is boldly typed on their menu: NO MSG guarantee. The Laska broth was our favorite, it was spicy with a thin layer of chili oil and coconut milk to add a slickness to the overall meal. The beef brisket was tender and sliced paper thin. My aunt recommends the fish and pumpkin broth but they were sold out so I'll have to try it next time when I return. 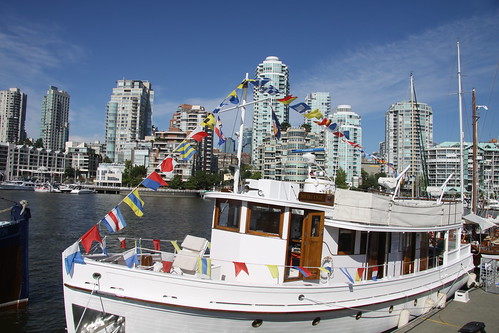 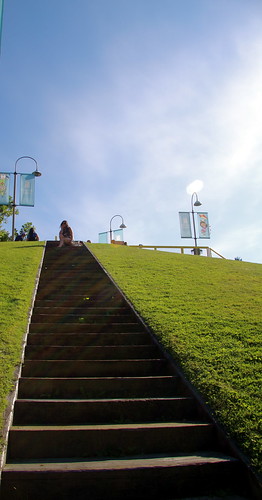