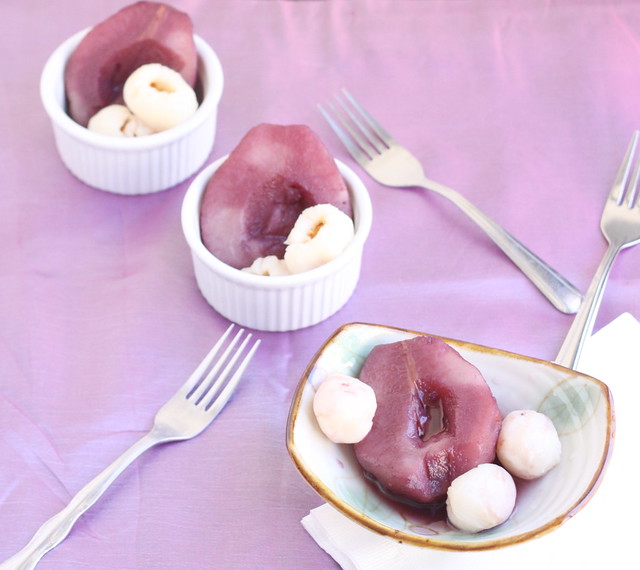 Ever since my Christmas brunch where I had red wine poached pears with marscapone for dessert I could not stop thinking about them. I liked how the dish was so simple and refreshing as the last bite of a heavy meal. I procured a bag of pears from my local bulk warehouse and I also had a bottle of wine given to me as a hostess gift, so off we go...

My brother gave me a can of Kern's Guava juice for lunch the other day so I decided to mixed up the poached liquid with exotic flavors. And we segued into lychees because what marries better then lychees and guava.

Peel, core, and halve the pears. Drain the liquid from the can of lychee and reserve fruit for garnish. Put red wine, honey, guava juice, lychee liquid in a large pot and bring to a boil. Drop the pears into the liquid and bring to a boil then reduce heat to a simmer. Cut out a circle piece of parchment paper to fit the surface of the pot. Place the parchatment paper on top of the pears to ensure they are all submerged. Cook the pears until fork tender.

Place the pears in a bowl and covered with the cooking liquid. Refrigerate the pears over night.

Before serving the pears, drain the liquid into a sauce pan and cook until reduced to a syrup (coats the back of a spoon.) Serve the pears with the reduced syrup and garnish with lychees. 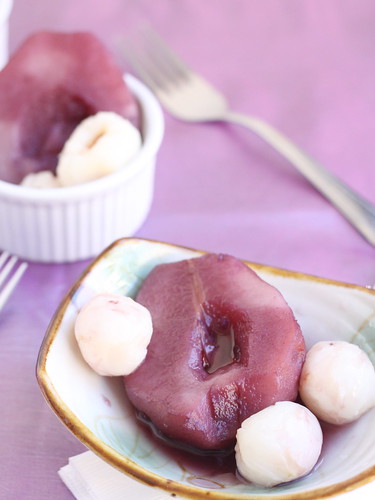 If I wanted to be all fancy and bow tie affair-like, one can get gold flakes adorned on the pears. (I actually had that at my Christmas bunch.)

Red wine, guava and lychee, divine. You've been on my mind and I was hoping all was well. It's been too long and hoping to see you again soon.
-Gina-

Poached pears are great for whatever occasion. Love the presentation!

Guava juice, Lychee, Pear and Red Wine.. I can only think of one thing. Hand me a bowl of what you are having please? LOL.. It's been so long, and I see you have been busy traveling. Have a great time Bonni dear!! Huggggggsssss