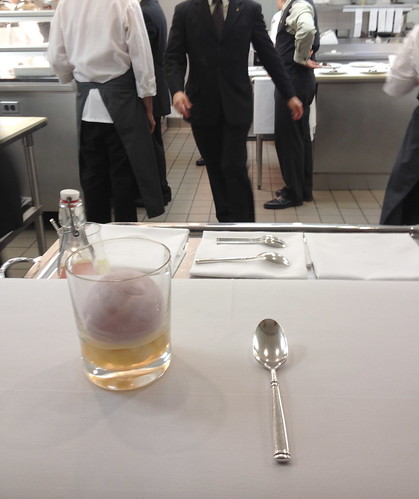 Jack Rose Cocktail: Apple brandy and frozen grenadine
Eleven Madison Park was our first dinner in New York City. Prior to visiting, our friend 'Patches' (a native New Yorker) asked me to comply a list of restaurants I would like to visit and he would take care of the reservations. I had Roberta's tasting menu and Eleven Madison Park as 'must-visit' places. And it turned out Patches' friend worked in the pastry department.

Thus, we had the opportunity to visit the 'Observation Table' in the kitchen. We opted for the tasting menu with the now famous table side craved whole Lavender Muscovy duck. After our succession of canapes we were invited into the kitchen.


Construction of the Jack Rose (video)

We saw a demostration of the cocktail Jack Rose equipped with hard liquor, liquid nitrogen, and grenadine. After the Ooos and Ahhhss we returned to start our tasting menu. Earlier, when we were welcomed to Eleven Madison Park we were greeted with a box ribboned in a bowtie, where we unwound the string to find mini savory black and white cookies, a signature New York cookie; and just like Eleven Madison Park whereas the restaurant is distinctively New York City. The theme is later reemphasized with an egg cream soda and at the end of the night with mini sweet black and white cookies. 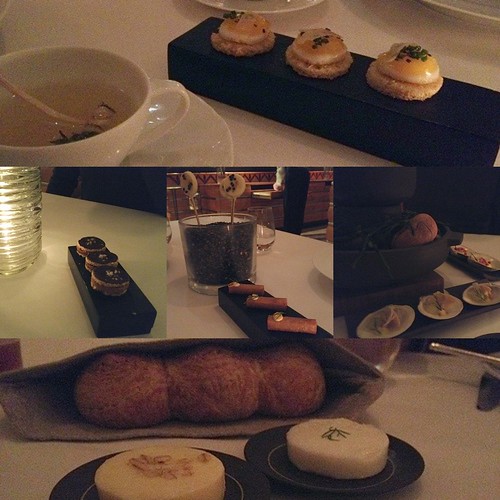 Capanes (top to bottom) : apple thyme tea, quail egg, peanut butter, yogurt pop, panisse, clam bake, bread with cow and goat butter
My most memorable dishes of the night was the foie gras and goat cheesecake. The foie gras is cured and sliced thinly, sliced almost like a deli meat. It had a scooped ice cream texture, refined and where it had a stuck-to-the-roof-of-the-mouth quality.

While we were in the kitchen, Patches' pastry friend said she would send out different desserts for each person so we can get a taste of everything. The dessert that stuck out was the Chamomile with coconut sorbet, lime and jalapeno. The calm nature of the flavor was revved with a small kick of spice. We ordered the siphon coffee to end the night. Just watching our server make the coffee is a treat, she explained the process and even told us about cold spots in the room where it can take twice as long to siphon the coffee. 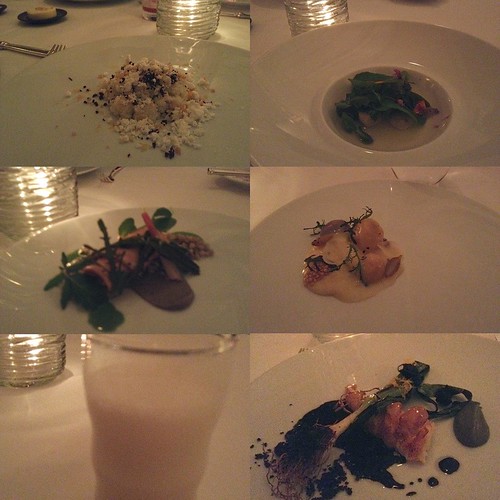 Left to Right: Cauliflower, Whey, Foie Gras, Cheese Course, Egg Cream Soda, Lobster
The night tied back together with a sweet version of the black and white cookies, like reading a book the end was reaffirmed to a satisfying conclusion.

As we parted from Eleven Madison Park, Patches told us a brief history of the building. The Eleven Madison building is registered as an National Historic building and was planned as a 100 story building but the Great Depression happened and construction stopped at 30 stories. I turned around once more to admire the building at the 1 am hour as I got back into the car to enjoy the rest of New York. 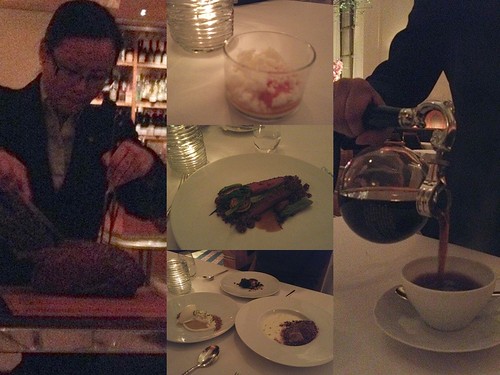