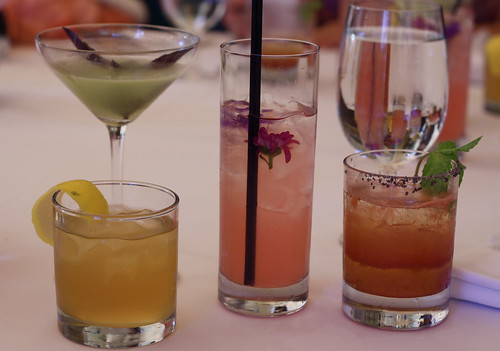 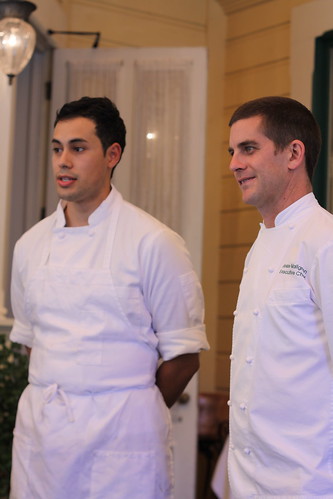 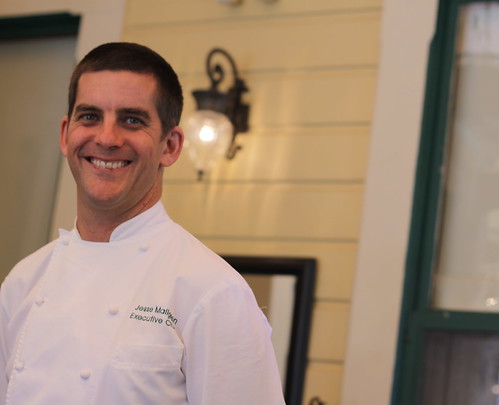 
A few weeks ago I was invited to Madrona Manor for a Cocktails and Confection reception to showcase new Pastry Chef Emmanuel "Manny" Fimbrez's desserts. In attendance was also Excuetive Chef Jesse Mallgren with a 13 year tenure and Mixologist Pam Bushling. While being encased in the natural beauty of Healdsburg the Manor itself was handsome and grand. (I don't want to forget to mention the owner was also on site and coordinated well with the Manor's handsome and grand characteristic.) Albeit, the physically beauty, the team of Mallgren, Fimbrez, and Bushling gave an aura of excellent chemistry. A feeling I have not have in awhile while dining.


Running late due to work, I arrived just in time for the first course pairing of Cheese Please - sheep milk, honey, almonds and cocktail Lola - watermelon, Herradura, silver tequila, Don Miguel Mezcal, lime, Hiwa Kai lave salt. Seated next to one of my favorite blogger Sandy of Foodhoe we started the afternoon. Chef Fimbrez started in July 2012 and was last at Saison, which was my best meal in 2011. One dish that stuck out to my companions and I at Saison was the cheese course. 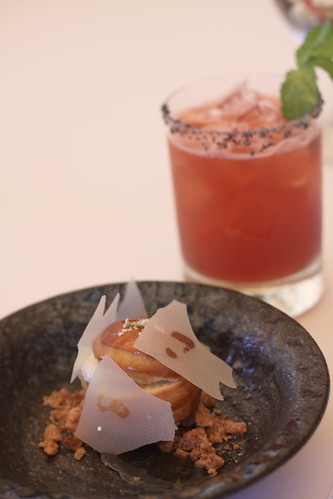 Cheese Please
I wondered when I will get to taste that dish again, low and behold Chef Fimbrez had a similar version at Madrona Manor. Cheese Please was brioche piped with sheep's milk sprinkle in milk glass and honey. The milk glass depicting ridges like real shattered glass. I knew we were in for more visual avant garde dessert courses...

Milk and Cookies - dehydrated milk, liquid cookies paired with cocktail Pearsusian - estate-grown pears, ginger infused Junipero gin, lemon, Tempus Fugit Violet Liquor. On one side of the dish was liquid nitrogen milk infused with cookies and on the other side was dehryated milk cookies sandwiched with chocolate. The two almost dissipated upon mastication - light, airy, subtle in flavor and clean. 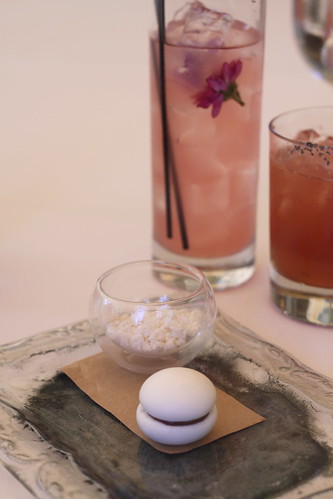 Milk and Cookies
Then we had Snap, Crackle, Pop - jasmin, puffed wild rice, orange blossom, rice ice cream paired with cocktail Basil Gimlet - Bombay Sapphire, estate-grown basil, lime. The meringue was infused with orange blossom. The rice ice cream was the stand out - Japanese rice seeped in the cream before delivering to the ice cream maker gave it a glutinous sensation between the lips. A texture in ice cream I have yet to experience and pretty amazing especially with the puffed wild rice. So many different levels of texture. 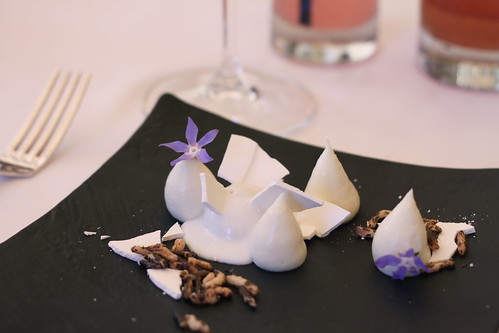 Snap, Crackle, Pop
When I have tasting menus, what keeps me alert and also at the same time revealing in the experience is texture. I can only imagine after the savory courses at Madrona Manor the mometumum is still kept up with the dessert part of the evening. This makes me want to try Madrona Manor's tasting menu for the full fledged experience.

The last course of the afternoon was Chocolate - basil, almonds paired with cocktail Casagrandes - house-made Limocello, Maker's Mark, ginger infused simple syrup, ginger beer. I was right about the avant garde plating, the chocolate dish was simply visually stunning. Chef Fimbrez saw dead oak and in his mind it equals to a plate. They cleaned the dead oak and dried them in the sun. The "dirt" is devil's food cake, piped chocolate cream and basil meringue. 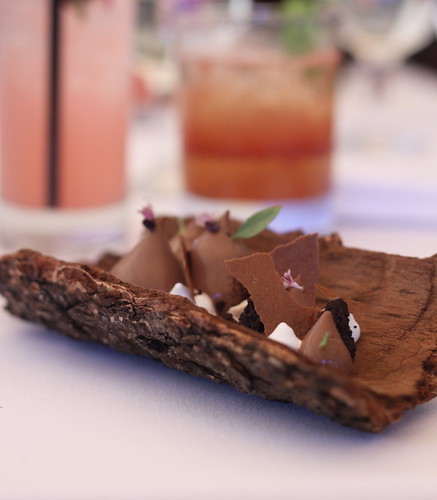 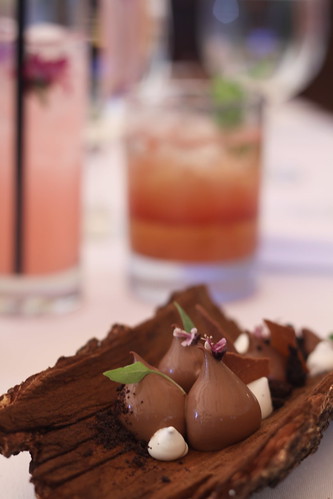 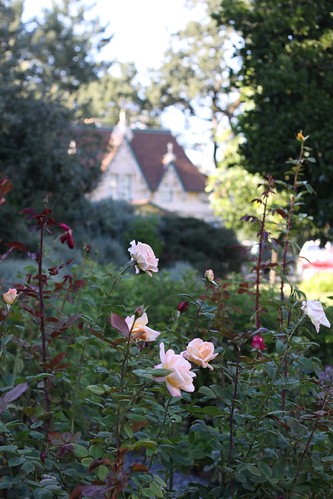 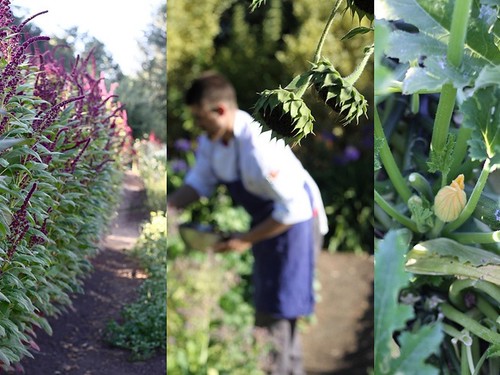 
We took a tour of the garden after the reception. We poked and peered through the sprouts, leaves, dirt, and flowers.

The current team at Madrona Manor is doing some fantastic things and really motivates me to plan a weekend in Sonoma. Pam told us about their Charles Dickens themed dinner in the month of December, whereas there are people who are dressed in the period costumes. In addition, if one attends the Charles Dickens dinner the hotel room is half off! What a great little secret to know. However, I hope to return sooner and since my sister's birthday is in November...it sounds like a plan... 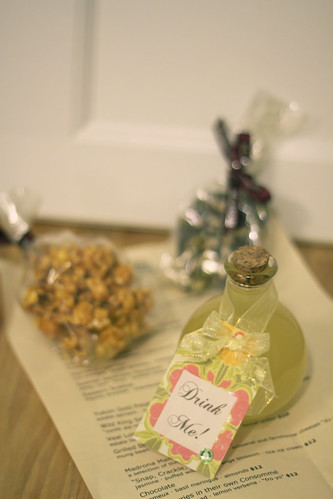 What a fantastic adventure. I'm heading that way hopefully sooner rather than later and will have to stop by for one of those cocktails. Love the snap, crackle and pop. Will send you an e-mail about lunch.
-Gina-

Hey there Bonibella! I'm glad you made it and to have finally met. Love your photos, especially the garden pix, and the shots of the desserts are so droolicious! I didn't realize Healdsburg is so far, wish I could have stayed at the inn for the weekend and tried their savory tasting menu... Lets plan something in October!